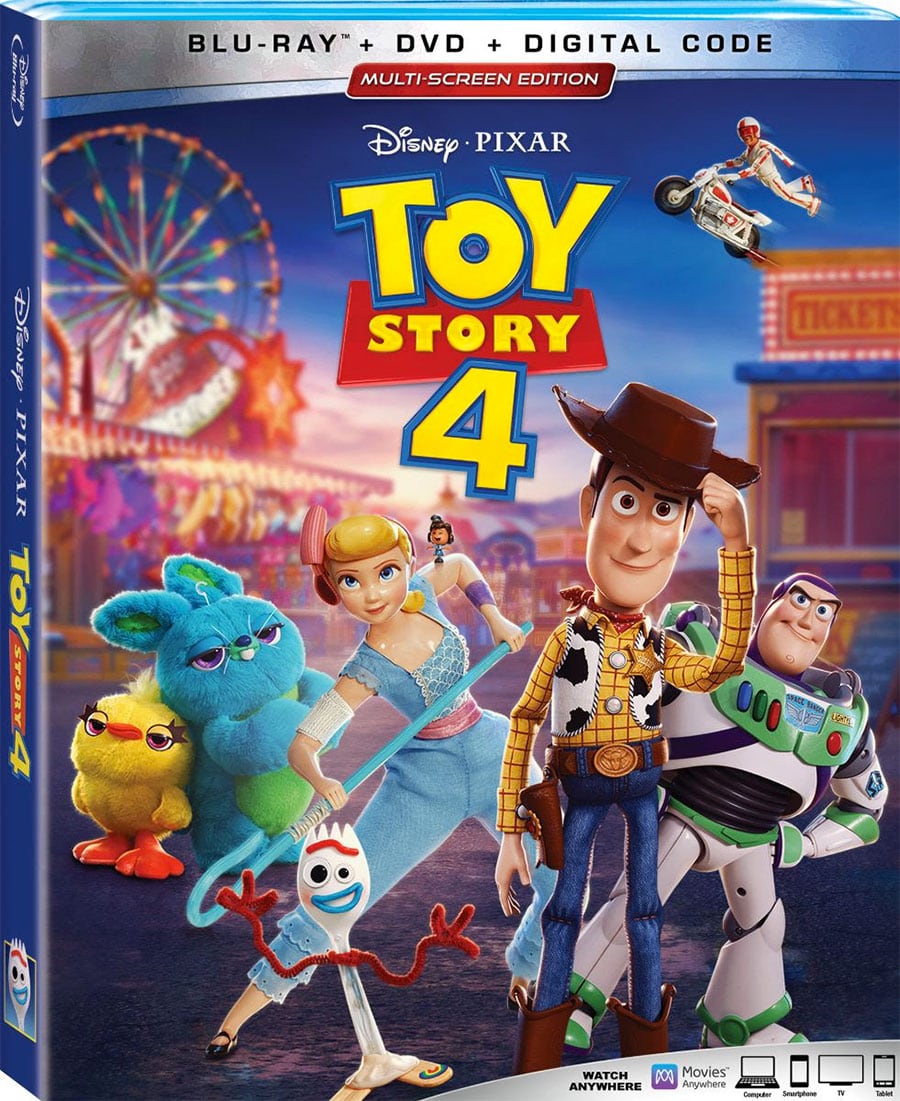 It’s always great to see the characters from Toy Story come back for a TV special or movie. Toy Story 4 has a lot of great moments in it but I might be in the minority in this and think this one is my least favorite Toy Story movie.

Things pick up where Toy Story 3, Halloween and Christmas specials left off with the toys being taken care of by Bonnie. Woody (Tom Hanks) feels neglected lately with the other toys getting prime playtime with Bonnie. When Bonnie gets to orientation for school, she creates a new toy called Forky (Tony Hale), who doesn’t know what he is or what anything is. He keeps going to the trash since that’s what he was made from. Woody feels an obligation to protect Forky since he’s Bonnie’s favorite new toy. While on a road trip, Woody and Forky get separates from the other group and have to make their way back to the RV where Bonnie’s family is. Along the way, Woody finds Bo Peep (Annie Potts) who has been living as a “lost” toy with some other toys. In the process, Forky gets taken by a talking doll called Gabby Gabby (Christina Hendricks) and her creepy doll henchman in an antique store. Woody gets some help from Bo, and others to rescue Forky and bring him back to Bonnie.

This is very much a Woody centric movie, and if you haven’t seen this yet and in hopes it’s something with the whole gang – you’ll be disappointed. The group is in the movie but it’s only in a scenes here and there which makes me sad since I like them a lot. I enjoyed the movie, but something feels off about it. I think the focus was too much on Woody, Bo Peep, Forky, Gabby Gabby and that whole plot. This was Woody’s swan song in a way, which I get but I wish the rest of the group got more time. I was happy to see at least Buzz get to spend time with Woody.

As far as the new characters are concerned, Forky was okay but the best ones were Ducky and Bunny, voiced by Key and Peele. They stole every scene they were in and brought the most laughs, especially the scenes with the old lady in the store. Can’t forget Duke Caboom as well, who was funny and was voiced by Keanu. It was great to see Annie Potts back as an updated Bo Peep as well. Sadly, Mr. Potato Head wasn’t very vocal since Don Rickles passed away. Originally, it was rumored Alan Tudyk would voice him but then they just ended up using archive dialogue from Rickles.

I think the story was interesting, in that some kids just lose interest in certain toys after awhile and gravitate to other ones. Plus, in this universe we got to see what happens when a kid uses their imagination and makes their own toy. I liked that part of it. I wasn’t really happy with the way things ended though. Without spoiling things, I wish it turned out another way and things went back to the way they were. I guess that’s life and you move on though. I’m hoping if they plan on doing more movies, they either completely do a reboot with all new toys, or spin-off with Ducky & Bunny, or Buzz and that group. I could even see another Woody & Bo Peep movie if they really wanted to do one again. Guess time with tell with what Disney plans on doing with this franchise.

The extras on the Blu-Ray include featurettes, deleted scenes, audio commentary, and other things. Sadly, no animated short this time around. I believe this was the first time we didn’t get one before the movie at theaters and not one on video either. The featurettes were your standard stuff, with some quick glimpses on how things were done and interviews with cast & crew. The deleted scenes were just storyboard animations, and toy box extras were just features on the new characters. Some decent stuff in the extras but could have been better.

Toy Story 4 is a highly praised movie from critics and fans alike. I liked the movie but it’s my least favorite. I just didn’t like how it focuses on Woody & Bo Peep so much and the others got more screen time. The movie definitely has some funny scenes and lines, and I even find myself saying “trash, trash” all the time in the Forky voice. Of course, Pixar keeps upping the game with their animation style so no complaints there. Ducky, Bunny and Duke Caboom were great though and wouldn’t mind more stuff with them in it. I would have liked to have seen the movie end differently but I get why they did what they did. As a fan, I wanted the toy adventure with the original group to continue but wasn’t meant to be I guess. In the end, Toy Story 4 is still a good movie but just not my favorite.