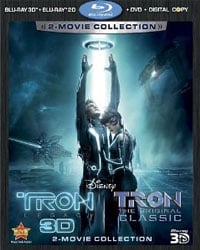 Having both Tron and the sequel Tron Legacy all on one set is a brilliant idea. While some may not like the sequel, I thought it was really fun, very entertaining with an excellent score from Daft Punk!

Since this is a 2 movie set, I still only want to focus really on Tron Legacy. The sequel starts off with it explaining that Kevin Flynn (Jeff Bridges), a genius computer engineer and CEO of ENCOM went missing 20 years ago and left behind his son Sam (Garrett Hedlund). His son is the controlling shareholder for the company now, but takes little interest in the company. Just like his Father, he’s a troublemaker, very smart and likes his thrills. One day, ENCOM executive and friend of his Dad’s, Alan Bradley (Bruce Boxleitner)…aka Tron, visits Sam and tells him he got a mysterious page from Kevin Flynn. He tells Sam to go down to his Dad’s old arcade and see what he can find. He ends up getting zapped into The Grid, the virtual world his Dad created. There he finds things more advanced than what his Dad told him 20 years ago, and Sam begins to look for his missing Dad.

Tron: Legacy has been in the works for a long time, and I’m glad it finally came out. The graphics and the Daft Punk score alone is worth seeing this movie at least once. I thought Tron: Legacy was just as strong as the first one. It takes the cool parts of the first movie, like the games, and expands upon that. You get more action and cool stuff, plus hot women in tight suits. Casting Olivia Wilde as Quorra was genius. Not only is she hot normally, she’s even hotter with a black wig and eyeliner around her eyes. Super sexy!

I don’t know why this movie got so many mixed reviews. It can be cheesey, and seeing CGI face of Jeff Bridges does take some time getting use to. Besides that and a few lame lines, I really liked the movie and felt it was just like the original. Sure, I would have done things differently like included Tron/Alan in the movie more. Or even included RAM and Yori! I hope if there is a sequel, those characters are included more. Based on the extras and the way the storyline ended, there’s definitely a lot more story to tell.

If you decide to get the Blu-Ray 5 pack, you have made a smart decision. You get a 3D version of the movie, as well as the normal Blu-Ray which is awesome! The movie looks & sounds amazing on Blu-Ray, almost better than seeing it on the big screen. You get the original Tron movie on Blu-Ray, which also looks great by the way. Not bad for an 80s movie. The bonus material was okay, I was hoping for something more extensive. The Next Day: Flynn Lives 6 minute clip was cool to see, which features Alan and Roy (aka RAM). There’s some hidden things in the Blu-Ray, but I’m not smart enough to crack them. I guess it’s a clip of Ed Dillinger’s son talking about Sam Flynn towards the end of the movie. I wish extras would just be presented in a way that you don’t have to work for them. Besides that, there’s a few featurettes that are decent but nothing at the extend I would have liked. I can’t get everything all the time I guess.

Tron and Tron: Legacy are movies that I like and find entertaining. The light cycle and the games are the highlights of both movies, but Tron: Legacy has a Star-Wars-ish battle sequence at the end that is very cool to see! Plus, I love the fight scene at Castor’s place. It also helps that it had a very awesome Daft Punk track playing during it. Leave your mind at the door and just sit back and enjoy the movies for what they are worth. Popcorn geek entertainment!

Bottom Line: Both movies are entertaining and worth watching over and over on Blu-Ray
Running Time: 219 mins
Rating: PG
Extras Rating:
Overall Rating: