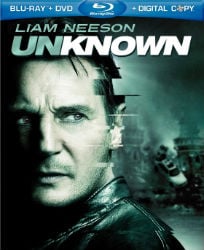 Liam Neeson stars in this action thriller, as Dr Martin Harris, who arrives in Berlin for a Science conference when something terrible happens and awakens with no memory and his wife unaware of who he is. Co starring January Jones, Aidan Quinn, and Diane Kruger, this film is filled with angst, thrills and some great action from Director Jaume Collet-Serra. If you enjoyed Taken, than you will really enjoy Unknown. Neeson has proven he is emerging as a badass action star.

Imagine waking up from a coma, in a foreign city like Berlin, and not having a clue what is going on. Dr Martin Harris has this very problem and it doesn’t help the few things he does remember like his wife, and the details on which he was there, but the problem is his wife does not recognize him and someone else has assumed his identity (Quinn.) Alone, confused and tired in Berlin, Harris stumbles upon an ally in Gina (Kruger) and they seek out the truth and what the hell is going on. Determined to find out the truth, Harris and Gina are on the run from mysterious people and this can prove deadly.

Only a few extras round out this Blu Ray+Dvd Combo pack, with a look at Liam Neeson as Action Star in a short featurette. It features interviews with Neeson, and the cast as they discuss what it is like to work with Liam Neeson and the stunts on the set. Rounding out the features is Unknown: What is Known? as it looks deeper into the plot and the characters involved in the story. If the film is leaving you scratching your head, than you might want to tune in and watch these featurettes as well.

Unknown is entertaining and definitely keeps you guessing to what is going on, and eventually all is revealed. I was worried for a bit that it would not be known exactly what had occurred and why did this event even occur but motives are revealed. Neeson is the one to watch in this, as always. Charismatic and you want to cheer him on in anything he does. January Jones and Aidan Quinn turn in good performances as well. Director Collet-Serra did a great job of capturing Berlin in the Winter and the set pieces really were nice to see where everything is not CGI backdrops to save a few bucks. Unknown may not be as good as Taken but it was very entertaining.

Features:
Liam Neeson: Known Action Hero – Discover how the star of Unknown solidifies his action star status
Unknown: What Is Known? – I’vestigate the characters and plot of this international thriller
Digital Copy Of Feature Film