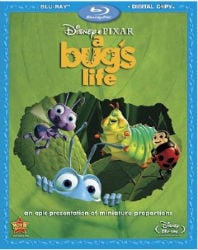 Pixar’s second feature film, and while it’s not as popular as Toy Story, it still is an excellent film done by an awesome Film Studio. Starring a huge cast that includes Kevin Spacey, Dave Foley, Denis Leary and Julia Louis-Dreyfus to name a few, the film really captures the essence of what life is like as a bug, or ant in most cases in the film. Directed by Andrew Stanton and John Lasseter, A Bug’s Life is a funny film that is also endearing and makes you feel bad about squashing and killing these little guys.

The story revolves around an ant colony, and the main character Flik, and how he tries to better himself as an ant. Coming up with creative ways to contribute to the colony, Flik tries his best to fit in. Unfortunately, when he manages to ruin the entire season’s food supply, Flik is in real big trouble with the Queen and Princess and is banished from the colony. To try and make good on his promise to better the colony, Flik ventures out into the “real world,” to find help and bring back super soldier’s to help them defend from the evil Hopper (Spacey) and his band of grasshoppers. Flik stumbles upon a group of what he thinks are group of warriors, yet he drags them back to only find out they are afraid to fight and are only a group of theatrical insects who like to entertain. The story has a nice flow with writing from director Stanton, Bob Shaw and Don McEnery and characters really come to life with a stellar vocal cast.

One of my favorite characters in the film was Heimlich, the German voiced caterpillar played wonderfully by the late Pixar employee, Joe Ranft. Heimlich was part of the traveling circus acting group and had a wide array of talent, including the praying mantis, voiced by Jonathan Harris, and the ladybug, voiced by Denis Leary who didn’t act so lady-like. I particularly enjoyed that whole group because if it was just strictly ants I could see it becoming stale but with the variety of the insects in the film made it more enjoyable to watch. The film looks amazing in high definition and really any Pixar film for that matter. This is how it was intended to be viewed, in glorious high definition. The colors are amazingly vibrant; clear with the bright’s and contrasts mixing well, and none of those pesky film grains we see with live action films. The audio on the high def transfer was clear, with the DTS-HD 5.1 Surround Sound blasting through the speakers.

The set features some excellent bonus features in high definition as well. I really enjoyed the roundtable discussion with the Filmmakers. They take a look back at the excitement of making the company’s second film and how this really was the film that led the groundwork for the company it is today, not Toy Story.They also take a look back at how much the company misses the funny, Joe Ranft. They loved how he would do all his impressions and even teased people not knowing when traveling with the company. Joe was not even supposed to be cast in the film but they liked his version of Heimlich better than the other voice actors out there so they kept him. The other thing I love about Pixar film’s is the now infamous “Outtakes” which is funny because it’s a cartoon and really not outtakes, is it? I thought that idea is brilliant. Rounding out the bonus features are a few strong choices including the Pixar short, Geri’s game, and more behind the scenes with the film. It was films like Toy Story and A Bug’s Life that made Pixar a household name for computer animation excellence and to this day, that legacy continues.