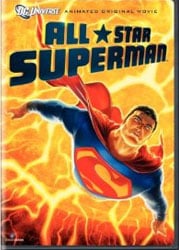 What would you do if you found out that you only have weeks to live? Wouldn’t you want to spend those weeks with the ones that you love? To do the things that you never got around to doing? To finish projects that you thought that you didn’t have the time
for? What if you were Superman, a man who is just about invincible, and a borderline god in the DC Universe?

All-Star Superman is a direct-to-video animated movie based on the award-winning DC miniseries by Grant Morrison and Frank Quietly. The plot basically starts off with Lex Luthor, Superman’s evil nemesis, winning. While trying to save the first manned space
mission to Earth’s sun, the shuttle is attacked by a superhuman Lex Luthor clone. Of course Superman manages to swoop in and save the day but while doing so gets a lethal dose of the sun’s radiation. The radiation gives him new superpowers but is also slowly
killing him. The Man of Steel realizes shortly thereafter that he only has weeks to live. He sets about making his bucket list.

The film follows Superman/Clark Kent as he tries to set things right in his life that he neglected and complete tasks that he had always pushed aside. Superman reveals his identity to Lois Lane and gives her superpowers for a day, has a one on one interview
with Lex Luthor as Clark Kent, saves a race of minute Kryptonians and save the world from imminent destruction along the way a half dozen times or so.

The story follows the comic series pretty well and manages to fit twelve issues into a nicely condensed hour and a half movie. The animation is beautiful that uses a very bright color palette similar to Superman: The Animated Series. It is very much what you
would expect if a comic book were to come to life, the action scenes being my personal favorites. The voice acting was very good even though Superman seemed kind of dull at times but that could have just been Superman being Superman. As for the script, it
managed to take what it needed from the comic books and weave it together with a few twists of its own.

I have to admit that personally, I’ve never been a huge Superman fan. He has always been way too overpowered and unapproachable at a human level. All-Star Superman manages to strip that all away and present a Superman that has regrets, that loves his family and the girl of his dreams and that, above all else, puts the lives and well being of others well beyond his own life. It makes Superman believable for one of those rare occasions. In a final plot twist and without truly spoiling the ending, you won’t believe who actually saves the day.