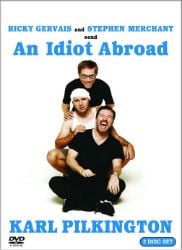 From the hilarious creators of The Office and Extras, Ricky Gervais and Stephen Merchant, comes a funny travel series featuring their friend and unlikely travel host, Karl Pilkington. The curmudgeon who doesn’t want to travel is set across the world to visit the Seven Wonders of the World, much to his chagrin. Karl Pilkington is hysterical in this, even though he may not feel like he is or trying to be, but An Idiot Abroad and it’s sequel are must-see viewing.

Ricky Gervais has always wanted the world to know who Karl Pilkington is. His good friend for many years, Gervais would bring Karl up in interviews to get the word out. After success with the podcasts and the animated series, The Ricky Gervais Show featuring Karl, Gervais finally gets his wish by sending Karl Pilkington out in the world as a travel guide to the Seven Wonders of the World. Karl doesn’t really want to go anywhere, but England, and would rather prefer holidays to Wales in Camper Van. Ricky and Stephen take much pleasure in knowing that Karl has to go to these foreign places and make Karl miserable in the process. At the same time, they think it will open Karl’s eyes to the world and learn to appreciate all forms of life. In Karl’s mind, he would rather stay home, drink a cup of tea and enjoy a bag of crisps.

Karl is sent off to the Seven Wonders of the World in China, India, Jordan, Egypt, Brazil, Mexico and Peru, and thinks he is just there to see the “Wonders” and leave. Well, not according to Ricky and Stephen. As footage rolls, you see Karl gets voice mail from both Ricky and Stephen detailing what other fun little adventures they have planned for him along the way, some of them, not fun at all. Most of them actually are fun for the viewer and complete hell for Karl. One of the cruelest bits is they make Karl visit Israel before heading to Jordan. As Karl is walking, completely unaware of the situation a van pulls up and grabs him, throws him into the van. Putting a black hood over Karl’s face so he doesn’t suspect who has taken him, Ricky and Stephen have signed him up for a Terrorist Survival Training course unbeknownst to him. I would have shat myself if I was Karl. I also would have kicked Ricky and Stephen to the curb as friends.

After visiting all the locations, Karl comes home to reflect on his travels with Ricky and Stephen. Karl looks back at some of the good times, in his mind not many believe it or not, and also discusses with the guys what he didn’t like about each location. In between discussing, clips are shown from the other episodes as a highlight reel.

With the set, you can find just a few extras including The Preview Show which sits down Karl, Ricky and Stephen to discuss the adventures that lie ahead as well as preview clips of future episodes. Not to mention deleted scenes of other things that Karl did that ended up on the cutting room floor.

The series’ concept worked brilliantly. Who wouldn’t cherish the opportunity to travel the world and experience all the wonders of the world in one given year? Not Karl. Getting dragged away for a TV show and experiencing the local culture is not his cup of tea. Ricky Gervais and Stephen Merchant enjoy the hell out of making Karl miserable in a foreign land. Better yet, despite Karl being such a grump about the world, they convinced him to do a second series premiering the end of January 2012.