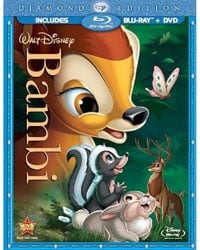 Bambi, a timeless Disney classic, is now available on Blu-Ray for the first time. The movie has never looked this good before and if you own a Blu-Ray player, this is highly recommended to own.

For all those that don’t know what Bambi is about, I’ll briefly tell you. Bambi starts off with his mother giving birth to the small fawn. After being able to walk, Bambi meets a rabbit called Thumper who teaches him to talk and play on ice. Thumper and Bambi are also friends with a wise Owl and skunk called Flower. Bambi learns the way of the forest through his Mother, until one day he has to go on his own journey through life without her. It’s a coming of age story that many people still adore.

It’s been ages since I last saw Bambi in it’s entirety. I honestly don’t remember when that was. I think the two scenes most people remember is Thumper and Bambi playing on the ice and of course, when Bambi’s mother gets shot by Sarah Palin. Even after seeing the Mom scene again, it was hard to fight back the tears. Seeing Bambi calling out for his Mother, it’s just heartbreaking. It’s not so much the Mom getting killing part, it’s Bambi frantically looking for his Mother. It’s just sad really, especially when you put a cute face and voice to the animal. I can’t really talk though since I’m a meat eater and probably won’t go vegetarian. The scene following that is just abruptly random, since it’s everyone singing that Spring is here. Go from one sad scene to a happy one? Way to play with my emotions Disney! My favorite scene in Bambi has always been the ice scene though. Every time at Xmas, I always like to see that scene in Disney specials.

Bambi is beautifully animated & scored. Having the movie on Blu-Ray is just wonderful. The new transfer and quality just enhances the film. When I’m watching Bambi, I feel like I’m watching one of those great Disney nature videos. There’s not much dialogue, the animation and score speaks for itself. The Blu-Ray has a few extras to watch after the movie. There’s a few never before seen deleted scenes that weren’t completely finished, there’s a deleted song, some classic DVD bonus features and Inside Walt’s Story Meetings – Enhanced Edition. Inside Walt’s Story Meetings sounds interesting but I didn’t get a chance to watch/experience that yet. From what I’ve been reading, it sounds good.

If you own Bambi already on DVD, I think it’s safe to say that this is worthy upgrade because the movie look fantastic. Granted the movie is still in full-screen but nothing they can do about that since that’s how it was made. Bambi still makes me weepy, but maybe I’m just a wuss. It’s a movie that everyone must see at some point in their lives.