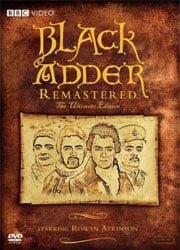 The acclaimed and popular UK comedy series Blackadder has been re-released in an excellent Ultimate Edition DVD with all new remastered episodes! For someone who’s never seen more than 1 episode, I’ve become an instant fan after seeing all the episodes (finally)! If you don’t own any Blackadder on DVD yet, you better get this DVD set!

Rowan Atkinson stars as Blackadder, a role he was famous for before becoming the silent doofy Mr. Bean. The show itself follows various Edmund Blackadders throughout the ages; from the bleak Middle Ages to the frontlines of The Great War, WWI. At Blackadder’s side is his dimwitted sidekick/servant Baldrick who always has a “cunning plan,” played by Tony Robinson. The idiot Lord Percy accompanies Blackadder and Baldrick in the first two series, played by Tim McInnerny. Hugh Laurie (a.k.a. House, M.D.) plays the idiotic Prince George in Series 3 (“Blackadder the Third”) and Lt. George in Series 4 “Blackadder Goes Forth.” Also co-starring & guest starring is Stephen Fry, Miranda Richardson, Patsy Byrne, Rik Mayall, and Robbie Coltrane.

Series 1, The Black Adder is set in the Middle Ages. The storylines is an alternate realty of what really happened, in that Richard III was accidentally killed and Richard IV took over as King. Richard IV’s second son, Edmund, the Duke of Edinburgh is the one who accidentally assassinates King Richard III. Edmund, a.k.a., “The Black Adder,” is the unintelligent, conniving son who plots to overthrow his Father’s thrown. Series 2 followed Lord Edmund Blackadder, the great-Grandson of Edmund, Duke of Edinburgh. Instead of the last Blackadder, this one is witty, charming, very sarcastic and extremely intelligent. The series is set around the reign of Queen Elizabeth I, which Blackadder comes into contact many times. Unlike the first series, Blackadder is surrounded with idiot servants from now on. The episode topics range from beheadings to alcohol.

Series 3 saw a bit of a change. Tim McInnerny wasn’t in that series because he didn’t want to be typecast so Hugh Laurie took over as the resident buffoon of Blackadder. Blackadder the Third was set during the English Regency, with Blackadder as the butler to Prince George (Regent) (played by Hugh Laurie). Some of those episodes include Blackadder rigging an election, Baldrick burning the first English dictionary, and The Duke of Wellington wanting to duel the Prince. Series 4 was a bit different than the other series since it took place during World War 1, right on the front-lines. Blackadder this time is the Captain, and is similar to his predecessors. He doesn’t want to get killed, and finds numerous ways of trying to avoid that. In the 4th series, Blackadder’s nemesis is Captain Darling, played by Tim McInnerny who returned after finding a new role to play. Some of the episodes in that series include: Blackadder mistakenly shooting a messenger pigeon, Blackadder joining Lord Flashheart’s Royal Flying Corps and the “big push” is imminent and Blackadder tries everything he can to get out of it.

Believe it or not, Blackadder was probably one of the last British comedies that I’ve seen. I’m a huge fan of British comedy but only saw the last episode of Blackadder Goes Forth. From never seeing most of the series, I really like Blackadder II, Blackadder The Third and Blackadder Goes Forth the most. Black Adder series 1 was a big disappointment. I actually didn’t really like it, and hated the character that Rowan Atkinson was playing. He was annoying, had a dumb voice and the episodes weren’t really that funny. I’m really happy that Ben Elton came on board in the second season because it made the episodes so much better. I liked having the show filmed on set instead of on location, it made it less dreary. You can tell right from the beginning that Blackadder II was different and funnier. I’d rather have Rowan Atkinson be witty and sarcastic then playing an imbecile. On the other hand, I’d rather have Baldrick and Percy playing the idiots. I think it was the right move to switch those character traits around.

Tony Robinson’s Baldrick is such a hilarious character, and definitely the heart & soul of the show I think. Sure, he’s a bit of a moron but he also sees things for what they really are. Tim McInnerny was great in Series 2, and I liked how he played the “villain” as Captain Darling in Series 4. You can imagine the jokes that were used with his lines; so simple but effective every time. He was missed in Series 3, but it was great having Hugh Laurie step into Series 3 as the series buffoon. He definitely added something to the show, and I think Series 3 might be my favorite out of the Blackadder series because of him. I think the show also benefited from having Stephen Fry on the show as well. One character that should have been a full-time character was Lord Flashheart, played by Rik Mayall. WOOF WOOF! He had me in stitches with the stuff that he was saying. Big ego, sexist, full of himself lines that were delivered perfectly. There should have been a spin-off of his character. I don’t think I could choose between Blackadder and Mr. Bean as my favorite Rowan Atkinson character. They are both excellent in their own ways. I can tell just from watching this show how influential it was for other comedians and TV shows.

Included on the DVD set are all the TV specials, brand new audio commentary with various cast & writers, the 25th anniversary documentary on Blackadder, extended interviews with the cast & writers, and costume featurettes with some of the cast. The TV specials I’m still watching but the Christmas Carol spoof was good. I liked how he started off as a nice pushover, and the ghosts tell him to be mean. I’ll watch the other specials as soon as I can, because I can’t get enough of Blackadder now! The 60 minute documentary, Blackadder Rides Again was excellent! That was definitely interesting to see. The extended interviews were good as well.

If you never seen an episode of Blackadder before, I’d recommend skipping series 1 entirely and starting with Blackadder II. You’ll still get the gist of things and you won’t be lost. The cast features brilliant actors & actresses that you will recognize, the writing is sharp & intelligent, and the show is just a classic British comedy! Laughter is guaranteed!