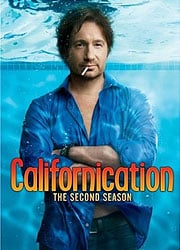 The first season of Californication was excellent and just something I never really saw on TV before. The ending was kind of lame but the rest of the season was hilarious, and offered a nice mix of comedy and drama. The same applies for Season 2 of the Showtime show.

Californication is about Hank Moody (David Duchovny), a novelist who’s one cranky individual, often mixed up with lots of women, drugs, and various outrageous situations. In the end, the things that he cares most about is his on and off again girlfriend Karen (Natascha McElhone) and his daughter Becca (Madeleine Martin). His best friend is Charlie (Evan Handler), who’s an agent and is married to a feisty tanning salon owner Marcy (Pamela Adlon). Last season, Hank ended up sleeping with a 16 year old girl named Mia (Madeline Zima), which he didn’t know at the time. He also found out that she was the daughter of the guy that was going to marry Karen. All of last season, Mia was a thorn in Hank’s side but the biggest thing was stealing Hank’s book and passing it off as her own. That storyline continues to pop up in the second season. The end of season 1, Karen leaves Bill for Hank and everyone is happy…or so we think.

The start of the new season picks up after that. Bill is no where in sight and still torn up about Karen leaving him. Hank is still Hank and fucks things up like usual. These two people are just destined to be an open relationship, and to keep trying to stay together for the sake of Becca. The couple attends a party with Sonja (Paula Marshall) and her fiancé; Sonja is someone Hank slept with last season. Eventually Hank finds himself in jail for “assaulting” an asshole cop. In the jail, Hank meets world famous record producer Lew Ashby (Callum Keith Rennie). Lew wants Hank to write his memoirs and Hank eventually agrees. The whole season’s plot revolves around that but also a few other storylines like: Hank gets a vasectomy, Charlie gets fired and manages an up & “cuming” porn star instead, then falls in love with her while his wife Marcy is in rehab, Mia continues sleeping around with older men, Becca gets a boyfriend that likes Guitar Hero just as much as she does, Hank MIGHT be the Father of Sonja’s baby and Karen gets offered a job in New York.

Some say the second season of Californication wasn’t as good as the first season but I disagree. It was just outrageous and hilarious as the first season. Hank and Karen are still trying to make their relationship work, and Hank’s still screwing random women. I actually like when Hank’s not with Karen because it makes for more interesting television. This season definitely felt like 2 separate storylines: Hank’s storyline and Charlie’s storyline. Charlie (Evan Handler) and Marcy (Pamela Adlon) could definitely have their own TV show because they were probably the funniest things about the season. Seeing Marcy so coked up is hysterical, and Charlie trying to date a porn star makes for some great TV! I really liked the Lew Ashby storyline, and it definitely added to the rock n roll vibe you get from the show. Callum Keith Rennie did an amazing job as Lew Ashby, and gave a nice balance to Hank’s eccentric character as well. It’s just a shame he won’t be on the third season. But the lifestyle that Lew had, you just don’t see those type of people living that long.

The bonus features include commentary, a featurette with Pamela Adlon exploring a real tanning salon, interviews with cast and some previews from other Showtime shows. The interviews were pretty good, and each cast member talked about Californication and their characters. The intro music to each segment got annoying after awhile though. The tanning salon featurette was funny because Pamela was there interviewing real life people getting their bodies waxed or their assholes bleached. I didn’t listen to the commentaries so not sure how they are.

Season 2 of Californication is just as good as the first season. I would recommend getting both seasons of the show on DVD before you check out the third season on Showtime in September.