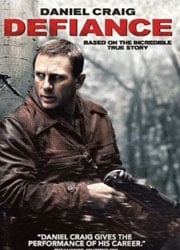 One tread in movies lately is the anti-Nazi film. You have movies like Defiance, Valkyrie and the upcoming Inglorious Basterds by Quentin Tarantino. Hey I’m all for revenges on some Nazis! I enjoy most of Ed Zwick’s movies and the same goes with Defiance. While some may not like it, I did.

Defiance is about The Bielski Brothers: Tuvia (Daniel Craig), Zus (Liev Schreiber), Asael (Jamie Bell), and Aron (George MacKay) who avoid being persecuted in Nazi occupied Poland and fight back. Their parents end up being murdered and the brothers flee to the forest where they setup camp and vow for justice. Other Jewish escapees begin to meet up with them in the forest and the Brothers take them in. While all this is happening, Tuvia and Zus bicker like brothers do; mainly about what to do with the partisan group. But their feud dates back before the WWII. Zus eventually splits off from the group and joins Soviet partisans who help protect the other camp in exchange for their fighting services. Throughout the movie, the group of Jewish escapees move their camps after being discovered, and fight to survive.

Since this is based on a true story, I’m not sure how much of this is fact or fiction. I’m sure some Hollywood liberties were taken. But I do know that this movie was entertaining, especially for a World War II movie buff like me. I love historic movies, and ones like this that just haven’t really been told all that much. You usually just see films being made on the US side of things. You haven’t really seen Jewish people fighting back against the Nazis; expect maybe the original Inglorious Basterds? I could be wrong about that though. I felt the movie had a decent balance of action and storytelling. You got character depth on Tuvia and Zus but not so much on the other brothers. The direction of Zwick’s was great but the screenplay was a bit cliché in spots. Just some of the lines the actors said seems like you’ve heard a thousand times in movies.

I’m not sure how everyone else feels about it, but I thought Daniel Craig, Liev Schreiber, and Jamie Bell did an excellent job with the material. Daniel Craig played a character that wasn’t as gung-ho as James Bond. Someone who made quick decisions; sometimes they were the right thing to do, sometimes they weren’t. I wish Liev Schreiber played more roles like Zus. I just think he’s an awesome actor. Maybe I’m just a dumb American, but I thought their accents were convincing. At least the actors tried to speak in an accent, and not speak in their native accents. That’s one thing I would have changed in Valkyrie. Plus, having them speak the language (was it Polish or Russian?) was impressive as well.

Bonus material on the DVD includes audio commentary with Zwick, and 2 featurettes and a quick photo gallery. The featurettes were pretty good, and I liked the “Children of the Otriad: The Families Speak” out of the two. It was great seeing the descendants of The Bielski Brothers speak about them. They got to visit the set in Lithuania, and told stories of growing up with them. The other featurette just had on-set interviews the actors, writers, director and talked about the subject matter and how the movie became to be. There could have been more bonus features but I was satisfied enough with what the DVD had.

Defiance is a great story that hasn’t been told before, and features excellent acting from the stars of the film. If you enjoyed Ed Zwick’s previous films like Glory, Last Samurai, Blood Diamond, and Legends of the Fall then you’ll like this one as well.

Features:
– Commentary by Director Edward Zwick
– Return to The Forest: The Making of Defiance
– Children of the Otriad: The Families Speak
– And More

Trailer: Clash of the Titans