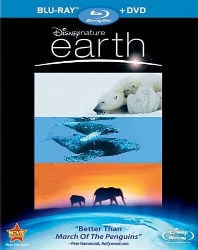 Disneynature’s first film from their new film venture, Earth, is a shockingly beautiful display of imagery, and story as it focuses on the planet from the North Pole to the South. Narrated by James Earl Jones, Earth is considered a shorter, fast paced “greatest hits” of the award winning documentary Planet Earth from BBC Films. Produced by Alastair Fothergill and Mark Linfield, this documentary is 5 years in the making. Featuring some advancements in film and photography, the documentary Earth captures amazing sights and footage. Rated G, some children or even adults will be frightened by the animals in their natural habitat and attacking others. Most appealing in high definition, Earth is a glorious sight to see.

Over 5 years of preparation and footage, the filmmakers amassed one of the largest budgets for a documentary and brought in some of the best photographers and cameraman. Filmed all over the world, the story starts off with a Female polar bear and her two cubs as they emerge from their snowy den on the side of a hill for the first time in over two months. The filmmakers strike gold with these shots as they scoured the area for weeks and weeks before finding this group of Polar Bears. While this story follows primarily the female and her cubs as they grow and the mother tries to train them to prepare for life on their own, the father is out alone amongst the polar caps and the ice and he tries to find food for himself. At times, it’s upsetting to see because the ice is melting over the course of the year. The real message behind this documentary is about Global Warming, though it’s not driven down our throats about it, the message is there. Without the ice at the North Pole, these creatures could not exist and would become extinct.

The next story deals with the dangerous and exciting journey of a herd of Elephants traveling across the plains of Africa to a watering hole. Heartbreaking at times, especially when the baby elephants struggle to keep up due to lack of water, and also when the Lions attack the herd at night trying to get at the babies. While upsetting, it’s important to realize that this still exists in the world, and it must exist in order for these animals to live in their natural habitat. There is a “circle of life” and humans must not interfere. Don’t worry, I’m not about to break out into songs from the “Lion King.” Fascinating to watch, this is just one herd of Elephants that are making the trek. This is happening in many other places in Africa, some more grim than others. It’s chaos out there for these animals, trying to survive in some of Nature’s harshest terrain. Virtually dry, and very hot makes any creature’s journey a suicidal one.

Other images are provided that are just simply spectacular. Whether it’s over massive waterfalls, or a flock of birds making the trek from Mongolia over the Himalayas to India for the winter, Earth is just one impressive shot after the next. The other story provided is a Female whale and her newborn, who make the massive journey from the Tropics to the Poles every year. That is roughly 5,000 miles that these Whales are traveling, and it’s no easy feat. These water mammals must deal with heavy storms, currents, and other predators in the Ocean.

Besides the film, I thoroughly enjoyed the Making of Earth. 45 minutes of behind the scenes footage on how these filmmakers, and photographers captured such breath taking images. I almost enjoyed this making of more than the film itself. The diaries really help you appreciate the work these filmmakers and producers did. Having endured the bitter cold of Antarctica, or the dry terrain of Africa, or the rough ocean seas to film Whales on their pilgrimage, the crew really deserve some accolades. The cameras that were created for the shoot were really impressive as well. The one was a rotating camera that was attached to the front of the helicopter and maneuvered by remote control from the cock pit and could rotate a full 360 degrees. I want one of those! This film was really impressive in Blu Ray High Definition as well. If you want to test out your new player and see what kind of colors, and contrasts you will be able to witness, pop the Earth documentary in. Lavish colors, and come through with such depth, that it makes you feel like you are right there. The Audio sounded excellent as well. Featured in DTS-HD 5.1, you might have to double check your living room to see if you have a herd of Elephants headed your way.