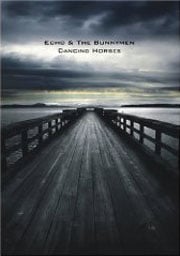 This DVD documents a live concert recorded in November 2005, in promotion of Echo’s excellent and overlooked 2005 release “Siberia.”

Having never seen Echo live, I watched this DVD keenly. Their stage presence is more or less as expected – the band is sedate and theatrics are sparse, letting the music, muted lighting, smoke effects set the mood. What is disappointing, though, is the lack of joy expressed by the band. They don’t seem as disdainful of their audience as The Sisters of Mercy (you might as pay to see cardboard cutouts), but energy is not exactly palpable.

But if any band had to rely on their music for emotion and mood, it’s Echo & the Bunnymen. The performance is top-notch and nearly album quality (surprising, since their songs are so velvety produced that you wouldn’t expect such a close live interpretation). The songs sound absolutely great and still cause those shivers down the spine, no matter how many times you hear them.

Camerawork is very good, though there’s little change in the band’s positions. Crowd shots are great, and I now know that I’m not the only one who visibly gets swept along by the music. Seeing the band pumped, almost moshing, for “The Back of Love” and “Never Stop” is a hoot. I also liked the shots of William Sergeant, as I’ve been trying to unlock the mysteries behind his guitarwork and effects. (To me, he’s up there with Johnny Marr in crafting a unique guitar sound in the early ‘80s.)

Ian McCulloch – one of the best voices in rock – still sounds great nearly 30 years after the start of the band. His voice is a bit lower now, and tends to yarl a little in the higher register, but songs rarely have to be retouched to elude the held, higher notes. Not bad for a middle-aged guy chain smoking through the concert.

His speaking voice, though, is an undecipherable mutter. He rarely banters with the crowd, only to introduce “Ocean Rain” as “the best song ever written” and close the show with, “Thank you, you’ve just seen the greatest band in the world” before abruptly marching off stage. Not to argue with those sentiments, but the cooler-than-thou rockstar attitude is hard to swallow.

It’s redundant to say since the band doesn’t have many bad songs, but the tracklist is phenomenal and will appeal to ‘80s purists. Besides the songs mentioned above, the 19 tracks are ‘80s-heavy with top hits “Bring on the Dancing Horses,” “The Killing Moon,” “The Cutter,” “Rescue,” and “Lips Like Sugar”; old goodies like “Going Up,” “Villiers Terrace,” and “All That Jazz” from Crocodiles and “With A Hip,” “Show Of Strength,” and “The Disease” from Heaven Up Here; and one of their best 90s songs, “Nothing Lasts Forever.” Siberia, probably their best since Ocean Rain, is represented by “Stormy Weather,” “Scissors in the Sand,” “Of A Life,” and the excellent “In The Margins.”

(Sadly, none of my favorite tracks off of Ocean Rain were represented, but Echo did recently do a tour where they played the album in its entirety, with full orchestra, and I expect it was documented in some form.)

The only extra is a good, lengthy interview with McCulloch and Sergeant (interviewed separately for some reason). Sadly, the dark shades-wearing McCulloch continued to annoy me with a mumbled Liverpool accent and self-important answers. Sergeant, I’m happy to report, seems friendlier and more grounded and provides great insight.

Bottom Line: “Dancing Horses” has a great tracklist and solid execution. Live presence is disappointing, as is being soured by McCulloch’s stage persona, and the DVD doesn’t offer much else beyond the show. Great songs, decent concert, but this DVD isn’t essential.

Favorite Scenes: Lips Like Sugar made me sing along at the top of my terrible voice.
Running Time: 133 min.
Rating: N/A
Extras Rating:
Overall Rating: 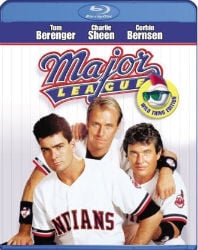