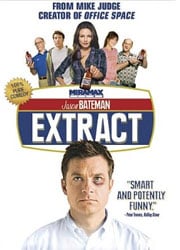 Based on the trailers, Mike Judge’s latest comedy looked really funny. While the movie has its moments and I’d probably watch this again, Extract still comes up short in the laughing department.

Extract is about Joel (Jason Bateman), who’s about to sell his successful flavor extract company. But that all changes when a freak accident happens at the plant, and turns everything upside down for Joel. Step (Clifton Collins, Jr.) lost a testicle in the accident and is on the fence with suing the company. While that happens, a sexy con artist named Cindy (Mila Kunis) comes into town and reads about the accident in the paper. She tries to get close with Joel to get more information about Step so she can steal his settlement money. While all this is happening, Joel and his wife Suzie (Kristen Wiig) are bored with their marriage. He never gets any sex from her since he works so much. He goes off every night to the bar to chat with his stoner friend Dean (Ben Affleck). He develops a crush on Cindy and foolishly plans with Dean to have Dean’s gigolo friend Brad seduce his wife. That way he can see if she’s having an affair and then he can have sex with Cindy. Like with most things, things don’t always work out the way you want them to.

I didn’t hate Extract but I also thought it could have been better & funnier. The storyline is a little thin, and they managed to make a movie about nothing pretty much. Just a few basic plot points like boring marriage, working in a factory, and a con artist. There were some funny lines in the movie, and the dialogue was good. There’s just something about the comedy that I can’t put my finger on. To me, the movie felt like it was running but wasn’t going anywhere. There was a lot of comedic potential with the storyline of Suzie and Brad the “pool boy” and even the annoying neighbor. They just feel underused, especially with funny people like Kristen Wiig and David Koechner. Ben Affleck’s stoner character is probably the funniest character in the movie. Jason Bateman plays the straight lace guy again, with a few funny lines about not be able to have sex or jerk off. Even Mila Kunis could have been in the movie more or had more to do than be the sexy con artist. She’s had plenty of comedy experience with Family Guy, Forgetting Sarah Marshall, etc.

I watched the Mike Judge’s Secret Recipe Featurette, which is just a 10 minute featurette about the making of the movie. I was looking for the deleted and extended scenes in the extras but couldn’t find them. Oh well, I guess I’m an idiot. It would have been nice to have a few more extras on here like a gag reel or something.

Overall, Extract is funny but not really in a laugh out loud way. I think Extract is the type of comedy that will get funnier the more you watch it. I didn’t hate this movie, but I didn’t outright love it either. It could have been a lot funnier I think.