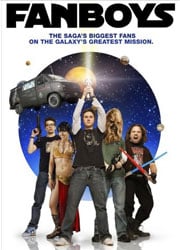 If you ever watched a Star Wars movie, you’ll appreciate this movie. If you’re a big time Star Wars nerd, you’ll like this movie even more. Fanboys is a dumb, low budget comedy but I found myself enjoying the film. It has a lot of funny references to Star Wars, hilarious cameos, and Kristen Bell in a slave bikini. I’d buy the movie just from the later.

Fanboys takes places in 1998 and is about a group of Star Wars geeks who are looking forward to the upcoming release of Star Wars Episode I: The Phantom Menace. Eric (Sam Huntington) is the one friend out of the group that is growing up, and has a real job. All the rest work at a comic book store and live in their parents’ houses. A few years ago, there was a falling out between Eric and Linus (Chris Marquette). After reuniting at a party, the two meet again and still end up fighting. The other friends Windows (Jay Baruchel) and Hutch (Dan Fogler) tell Eric that Linus is dying of cancer and only has a few months to live. They all agree to go on a wild trip together that involves sneaking into Skywalker Ranch and stealing a print of Episode 1 so Linus can see it. Along the way, they go to the birthplace of Captain James T Kirk and fight a bunch of Trekkies, they encounter William Shatner, and they get forced to dance naked in front of a bunch of gay bikers.

I didn’t know what to expect from the movie. I didn’t think it would be all that great but I ended up liking Fanboys a lot. Sure it’s a stupid comedy, and if you haven’t seen Star Wars most of the jokes will fly over your head. But in the end, this is one movie I could see getting funnier every time you watch it. Some of the scenes are a little cringy to watch because the things the characters say are quite nerdy. I’ve always been a Star Wars fan but there comes a time when I have to draw the line somewhere. I just get embarrassed when I see people dressed up in the movie theaters; especially if they demonstrate their lightsaber skills in front of the audience. That’s just taking it a little too far. So just imagine people like that, times ten and that’s the characters in Fanboys. Now you Star Wars fans don’t have to worry that you’re the only ones being made fun of, Star Trek fans get theirs too. I liked how both sides were portrayed, and that the movie was making fun of them, but also paying tribute to them at the same time. Every little thing in the movie was referencing Star Wars in some way. That’s why I think multiple viewings will be funnier each time, because you’ll pick up things you didn’t see the first time.

One thing you’ll notice immediately is all the cameos in Fanboys. The following people appear in Fanboys: Seth Rogen (multiple roles), Carrie Fisher, Billy Dee Williams, Ray Park (Darth Maul), Kevin Smith, Jason Mewes, Danny McBride, Craig Robinson, Will Forte, William Shatner and Ethan Suplee as Harry Knowles. Talk about an impressive list of cameos! I thought Seth Rogen was hilarious as the Trekkie, and that scene at Captain Kirk’s statue was hysterical. A lot of the cameo scenes were the highlights of the movie. As much as I liked the movie, Fanboys is still flawed and feels like something a group of college students wrote. If I had to change anything, I would have changed up Linus’ storyline up a little bit and not have him die in the end. That really was a downer, and in a comedy movie; people just don’t want to watch that. I would have had Linus lie about the cancer just so everyone would get back together and be friends again. Would have been better I think, and wouldn’t have been sappy in the end. I also thought it would have been funnier if the crowd watched Episode 1 at the end of the movie, and everyone booed & threw their popcorn at the screen. I still enjoyed the way things turned out in Fanboys though.

The bonus features include deleted scenes, audio commentary, a bunch of webisodes, and small featurettes about the making of the movie. A lot of the behind the scenes footage that was shown was shown throughout each featurette. I would have given us something else besides that. But that’s really my only complaint with the extras.

Star Wars fans should give this movie a shot, because I think a lot of people will like it. There are some problems with the movie and some characters can be annoying (ie. Hutch or Dan Fogler) but overall, I liked the movie. I can see Fanboys becoming a cult movie over time, thanks to DVD.

Features:
– Deleted Scenes
– Commentary With The Cast And Crew
– Disturbances In The Force: A Series Of Webisodes
– The Truth About Fanboys
– The Star Wars Parallel
– 4 Fanboys & 1 Fangirl
– The Choreography