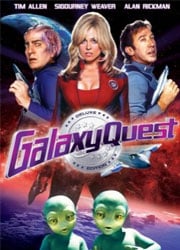 When Galaxy Quest first came out, I didn’t think I was going to like it. But I gave the film a shot and ended up loving it! Galaxy Quest is the type of movie I watch whenever it’s on TV, and after 10 years, the movie still holds up as being a funny homage & spoof of Star Trek.

Galaxy Quest is about a group of actors that have been subjected to geek conventions and store openings after their cult sci-fi TV show was cancelled 17 years ago. The show is clearly a homage to Star Trek. Jason Nesmith (Tim Allen) is the star of the show, and loves all the attention from the fans. It’s his former co-stars that dread all the overenthusiastic fans and typecasting they receive. At one of the conventions, Jason agrees to meet with a group of “fans,” who end up being real Aliens called Thermians. The Thermians are huge fans of the show, but only they don’t know the TV series was fake. They re-created the entire Galaxy Quest universe and want Jason, err Commander Taggart to negotiate with General Sarris. Sarris is a reptilian alien who’s in a massive war with the Thermians. The aliens recruit the rest of the Galaxy Quest team to help out and defeat Sarris. But can the actors become real heroes and play their characters in real life?

It’s been awhile since I last saw this movie, but forgot how funny it was and how many people are in it. If you look closely, you can see Rainn Wilson of the Office as one of the Thermians. This was Justin Long’s film debut as well, as one of the nerds who helps out Jason in the end. One thing I always remembered about this movie was how hot Sigourney Weaver looked with the blonde wig on and her boobs popping out. I’m sure most guys who saw this movie agree with me. Galaxy Quest was one of the first movies Tim Allen did after Home Improvement and this showed he can do other than things than grunting and tool-themed things. The overall cast that included the ones mentioned above, plus Alan Rickman, Tony Shalhoub, and Sam Rockwell! Talk about a great cast, and a cast that worked really well together. I’d love to see a sequel to this, but not sure how successful this movie was originally to warrant one.

The movie pays homage to Star Trek and pokes fun at conventions and their fans but it also praises the fans as well. If it was outright making fun of Star Trek fans, they wouldn’t have had the fans save the day at the end. But still, it’s still funny seeing Klingons pissing in urinals and how obsessive sci-fi fans can be. The story of Galaxy Quest is interesting, but not that original. 3 Amigos and a few other movies come to mind when thinking of Galaxy Quest. That doesn’t really change the fact that I really like this movie.

Since this is a Deluxe Edition, 10 year anniversary edition of Galaxy Quest, fans of the movies are treated with a lot of great extras. The 2 featurettes “Historical Documents: The Story of Galaxy Quest” and “Never Give Up. Never Surrender” were really good. It features all new interviews with the entire cast, and crew. They all reflect on how fun it was to film the movie, and just tell stories about the filming. That’s something to definitely watch when you’re done with the movie. The effects featurette is quick but offers up on how some things were done. ILM did the special effects and the late great Stan Winston did the alien costumes so you know you got some top notch SFX with this movie. There are a few other things to watch in the extras but those 3 featurettes are the notable ones.

Even if you’re not a fan of Star Trek and sci-fi movies, you’ll still enjoy Galaxy Quest. The deluxe edition offers up so much more than the original DVD release, which was deserved I think. The movie is underrated but it’s a really funny sci-fi comedy that I have to watch every time it’s on TV.