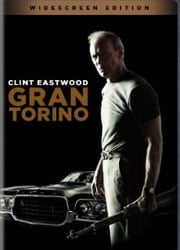 I didn’t know much about Gran Torino except Clint Eastwood plays a grumpy racist war vet. From having no expectations of the film, I ended up really enjoying Gran Torino.

Retired Korean War vet and automobile factory worker Walt Kowalski (Clint Eastwood) doesn’t like much of anything these days. His wife just passed away, he doesn’t like his self-centered sons and their kids, and he particularly doesn’t like his Asian neighbors either. He thinks the Hmong immigrants need to go back to their own country. He particularly doesn’t like the young neighbor Thao (Bee Vang), who tried to steal his prized Gran Torino car. Thao was being forced to join his cousin’s gang, and didn’t want to steal the car. An incident happens where Walt defends his next door neighbors, The Vang Lors, against the gang. The family thanks Walt, and all the neighbors leave gifts & food on Walt’s porch as well; only he just wants to be left alone. Eventually, Thao is forced to work for Walt to make up for trying to steal his Gran Torino. The old man and Thao form a Father/son bond, whether Walt actually likes it or not is another story. Down the road, more gang incidents happen that force Walt to take matters into his own hands.

I’m not sure if Gran Torino was meant to be a comedy, but I laughed a lot during this film. I think I laughed more at this than the over-hyped comedy The Hangover. Clint’s character is so overly racist and a cranky son of a bitch, you just can’t help but laugh at the guy. Every time he blurts out something racist, I just couldn’t help but laugh. I think part of it was shock at what he was saying, and who he was saying it to. Racist or not, Clint still has the acting chops to be terrifying and likable at the same time. Walt’s a likable hero despite being a cranky racist who doesn’t know any better. Besides the acting, Clint Eastwood also directs. He usually writes the scores to his films, but this time, his son Kyle handle the duties. I’m impressed that Clint is still doing movies and directing them at the age of 79.

The only extras on the DVD include 2 featurettes about the damn car. I’m not a car person; I just don’t give a shit. Why not have featurettes about, ya know, the making of the damn movie? Gearheads won’t mind the 2 short featurettes but if you’re looking for in-depth knowledge about the movie itself, you’re going to be disappointed.

Gran Torino is an excellent movie and one I didn’t think I’d end up liking. Clint Eastwood was brilliant as Walt, and definitely deserved more credit than he got. The film shows a racist old man putting his angry beliefs aside to help out people. This movie isn’t just about some old fancy car, it’s about racism, tolerance, and acceptance. Don’t ignore this one, be sure to watch it! I’m glad I did.

Features:
Manning The Wheel: The Meaning Of Manhood As Reflected In American Car Culture
Gran Torino: More Than A Car: Visit Detroit And The Woodward Dream Cruise