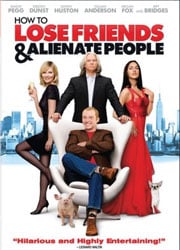 How To Lose Friends & Alienate People is Simon Pegg’s first shot at mainstream romantic comedies and I think he does a great job. I just think the rest of the movie has problems. It’s funny but flawed.

Pegg stars as Sidney Young, a British celebrity journalist who crashes parties and tries to mingle among the celebs. But at the same time, bashes their lifestyle and exposing how shallow everyone is. He always gets thrown out of the parties or does something wrong. He catches his lucky break when renowned magazine editor Clayton Harding hires Sidney to write for his magazine in New York. He starts to become close with fellow employee Alison Olsen (Kirsten Dunst), who tries to help out Sidney by not getting fired with whatever he says or does. He also has a mission to sleep with newcomer actress and the hottest celebrity Sophie Maes (Megan Fox). Her publicist gives Sidney a chance to write a fluff piece about some hack director and then about Sophie. He has to decide whether to write the pieces and go against what he really believes or make it in the NYC and “get into the next room” like Clayton Harding talks about.

I thought the movie had some funny moments and I laughed out loud a few times. But felt it was missing something. Not sure what it was though. I guess Weide couldn’t figure out if How To Lose Friends & Alienate People was going to be a romantic comedy or just an office comedy. I thought that was the problem that left the viewers confused on what we were watching. I felt if it wasn’t for Simon Pegg, this movie wouldn’t have been that great. His character is obnoxious and annoying, which provides funny results. Kirsten Dunst was cute as Alison and Megan Fox was the eye candy. If I had to choose between the two, I wouldn’t know which one to choose. The rest of the cast was fine, but I guess I just had a problem with some of the story. I liked the movie but felt it was flawed in certain areas. It sort of reminded me a lot like The Devil Wears Prada. Someone not in the click, that gets in the click and their personality changes in the process. I like how it shows the shallowness and bullshit that goes into covering celebrities and working at a fancy magazine. At one point, Sidney gets offered to write a fluff article about a hack director. If that was me, I would have said no and not gonna have some publicist tell me what to write. No offense to the publicists that are reading this review right now haha.

The DVD features only include audio commentary tracks by Weide & Pegg, one with Weide only and a making-of featurette. If you want to call trailers extras, those are on here as well. The making-of featurette is your standard making-of that has interviews with the cast and crew. It’s not that special but it’s about 20 minutes long. Worth watching if you really care about this.

The movie has lots of laughs but afterwards, I felt something was missing. I can’t really put my finger on it though. It might have been the story, or just the way it was shot? I’m not sure. Simon Pegg’s character is funny and annoying, but that’s the idea. Megan Fox and Kirsten Dunst are nice to look at. If you like movies like Devil Wears Prada and movies by Simon Pegg, you’ll at least enjoy this and laugh a little.