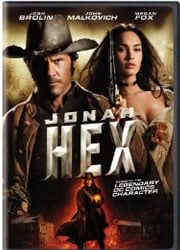 Jonah Hex might seem appealing to some, since it’s based on a DC comic book (graphic novel) but behind the good looks of Megan Fox, this movie is quite the stinker!

The movie takes place during post-civil war and is about Jonah Hex (Josh Brolin). Hex starts out in the confederate army but betrays his commanding officer Quentin Turnbull (John Malkovich) for not burning down a hospital and killing his son in the process. Turnbull gets revenge by burning down Jonah Hex’s house with his wife and son inside as Jonah is forced to watch. Turnbull brands his face and leaves him for dead. He is revived by Native Americans using mysterious powers and in turn gives him the interesting ability to temporarily revive and talk to the dead. Once Jonah gets better, he becomes a bounty hunter and stops in regularly to talk & screw his prostitute friend Lilah (Megan Fox). Jonah gets word from the President of the United States and the army that they need him to stop Turnbull and his companions from wrecking havoc on the country. Or something….

I’ll be honest, I had very little expectations for Jonah Hex and I felt like turning off the movie in the first 10 minutes. Josh Brolin did nothing bad really, but the dialogue and everything about the movie was just awful. For one, I can’t stand rock music in scores. Mastadon and Marco Beltrami scored the movie and I just think it was the wrong fit. So hearing lame rock music playing during action scenes immediately took me out of the movie. This felt like all those movies Last Action Hero was spoofing. Josh Brolin is a good actor but the way the makeup was, limited his acting to just bad John Wayne/cowboy impersonations. Megan Fox was pretty much in the movie for eye candy. Sure, she looks hot in tight western clothes, but that’s the only reason why she was in the movie. I don’t even remember any lines she said or if she even had any. Don’t get me started on John Malkovich, an actor that ruins every movie he’s in. Michael Fassbender actually was one of the best actors in the movie, in that he just looked like he was having a blast playing one of the villains.

The movie is only 80 minutes long, and it’s pretty obvious how a movie is going to be if it can’t even make it to the hour and half mark. The DVD extras are just some deleted scenes, but not worth seeing to be honest. I think Warner Bros and the filmmakers just had the idea of throwing shit at the wall and seeing what stuck. In this case, nothing did.