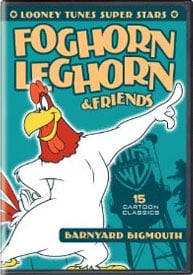 I say, I say we may have seen these animated shorts before son but this latest Foghorn Leghorn collection is top notch anyway. If you don’t already own the Golden Collections, this might be something to own.


Foghorn Leghorn is the Southern speaking Rooster who’s always causing trouble to his nemesis the barnyard dog, or perhaps trying to help out a supposedly helpless hawk or egghead. Some animated shorts he’s trying to get with Miss Prissy as well. He just always gets torn up in the process. His catch phrases are usually things like “that’s a joke son” or some lines like “That boy’s as thick as a whale sandwich.” Some of the episodes included in this collection: All Fowled Up, Fox Terror, Weasel While You Work, Little Boy Boo, Banty Raids, and many more! There are also a few random classic Looney Tunes episodes on here billed as “Friends.”

Just like most animated shorts from Looney Tunes, many of the Foghorn Leghorn cartoons are essentially the same. Same jokes, same sight gags, and usually the same characters. I obviously don’t have any problems with that though. I love Foghorn Leghorn cartoons, maybe not as much as others but I certainly enjoy the ones where he’s battling the barnyard dog or trying to teach a thing or two to egghead or that hawk. I always got a kick out of the Foghorn Leghorn short when he’s up against some beatnik rocker trying to score with some chicks. His on-going rivalry with the barnyard dog is always really funny too. It’s great to see what kind of plans and jokes they can come up with maiming each other.

Most Looney Tunes DVDs, you had to watch full screen. There’s an option on this DVD to watch the animated shorts in a fake widescreen or in full screen. I’d rather watch them in full screen instead of stretched out. But I guess its a nice option to have if you care about that sort of thing. This collection is decent and worth buying if you don’t own any of the Golden Collections. Since I have them all, it doesn’t make sense for me to own something like that as well. This might be good to have just so you can watch all the specific Fogohorn Leghorn character shorts on one disc.