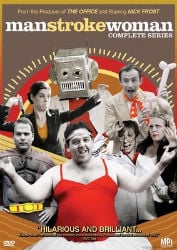 Hilarious sketch comedy show from the producers of The Office (UK) and starring Shaun of the Dead’s Nick Frost as he leads a six member comedy troupe in short, hysterical comedy bits and sketches. The complete series features both seasons of six episodes each as they cover a wide range of topics to relationships, friends, work, and family situations. Sketches are short in nature and deliver the punchlines in a fast paced manner. Man Stroke Woman is one of my favorite shows to come out of the United Kingdom in some time!

Man Stroke Woman is an excellent but short lived series that came out originally through the BBC, starring Shaun of the Dead and Hot Fuzz’ star Nick Frost along side with Amanda Abbington, Ben Crompton and Nick Burns, as the troupe delivers very funny and often outrageous sketches covering the every day lives of people, roughing in the age group of people in their 20’s and 30’s. You may have even seen quite a few of them on You Tube, and have generated over million of hits. Some of my personal favorite sketches involve Nick Frost. He’s the big loveable guy, and his comic delivery is priceless. One of his best sketches was the “one night stand,” with him waking up, hung over and horrified at who he was sleeping next to, as he sleeks down the stairs, he’s shocked to realize he actually is married to this women. The beauty of this show is that all the sketches are very short, most clocking in at about the minute mark, so they get in deliver the punchline, gag, etc and punch out Maverick.

The complete series features both Season 1 and 2, with 6 episodes for each season. Most of the sketches feature recurring characters and as the season goes on, some of the recurring characters jokes wear thin, but in the beginning, most are very funny. A few are hit or miss for sure. I prefer Season 2 as the recurring characters are not as annoying except maybe the “Friend at home pranks her roommate at work” bit. In Series 1, the guy who gets dumped by his girlfriend and cries hysterically the entire sketch is annoying after the first time, and his character can be seen sometimes several times in an episode. Other than those, the sketches are excellent and you will find yourself cracking up and laughing out loud quite often. Thankfully, Series 2 features completely different bits and characters. Lots of incidents can have everyday people relating to them like what not to say to your spouse, or inappropriate comments.

It’s tough to discuss all my favorite bits because they are so short in length and the total bit would be ruined so you’ll just have to buy the DVD and see or at least watch a few on You Tube to tickle your fancy. It doesn’t take much for you to get out there, pick this up and get caught up with all the madness, the series is only 12 episodes and you’ll be laughing in no time. The cast is great and all of them are strong actors with excellent comedic timing, and deliver the punchlines well. The bonus features on the set include plenty of cast interviews, bloopers, behind the scene footage and some short films with some of the stars of the show. If you enjoy the intro music like I did, than you will enjoy the feature on the Music of Man Stroke Woman and the band Sanderson Pitch. I also enjoyed the on set footage as the actors get set up for different sketches like Nick Frost and Ben Crompton dressing up in Sumu gear to wrestle real Sumu wrestlers, which was one of the bits on Series 1. So overall, pick this DVD up as its one of my favorite shows to come out of England in the last few years. It’s worth it.