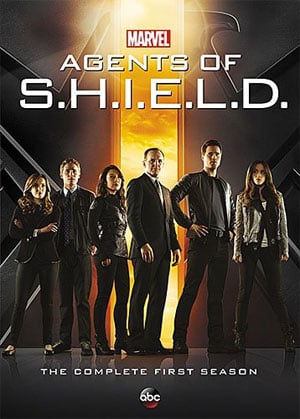 Marvel’s Agents of S.H.I.E.L.D is a show I bailed on because I just wasn’t feeling it early on, and my DVR episodes were piling up. I gave the show a second chance, which I guess you’re going to have to read the rest of the review below to find out what I thought. bum bum bummmmm.

Agents of S.H.I.E.L.D is about Agent Coulson (Clark Gregg) coming back to life (explained over the course of the season), and ensembling a small team to help with new cases. There’s Agent May (Ming-Na Wen), a mysterious veteran agent, there’s newcomer Agent Ward (Brett Dalton), and the brains of the team, Fitz (Iain De Caestecker) and Simmons (Elizabeth Henstridge). In the first episode, they investigate a superhuman, Mike Petersen (J. August Richards), and run into a hacker activist named Skye. She ends up joining the team once Coulson sees she’s an asset. Each episode they either are encountering new threats or playing clean-up based on what’s going on in the other Marvel movies. Towards the end of the season, events that happened in Captain America: The Winter Soldier unfold into the show and that’s when things get really interesting. Characters you think were the good guys, aren’t and turns everything on its head.

Like I said before, I maybe lasted 5 episodes in the first season before giving up. I just didn’t care for the characters in the beginning and thought the show was really bland. It’s a bit cheesy at times with hilariously bad green screen work but this show doesn’t have Game of Thrones’ budget. I heard the show got better and glad I got the chance to see it again because it does!

I would say around the middle of the season things take a turn for the better and everything just gets a lot more interesting. The characters aren’t boring like they were in the beginning of the season and everything that happened in Captain America: The Winter Soldier basically helped this show out…A LOT. They added in some twists, SHIELD adding in Antoine Triplett shook things up, Bill Paxton as a guest star for the remainder of the season certainly helped things as well. Paxton was really hamming it up and having a ball playing his character. He had a lot of great lines in there too.

I think my problem with some of the show had to do with the cast and some of the writing. I never liked Ward apart of the team and glad the way things ended up. I thought adding Triplett was a lot better for them and I think they could use another addition or two next season. I thought some of the writing was lazy and generic, plus the show just felt really hokey. It’s based on comic book characters so I can’t really be too critical I suppose. But a lot of my complaints were overlooked once the story of the episodes got better. The season ended strong with some nice cameos from some movie characters in the Marvel universe and I hope they re-appear again.

The DVD features include lots of little featurettes about the cast going to San Diego Comic Con, a funny blooper reel, some deleted scenes and behind the scenes reports. The blooper reel was good, I could always watch those on DVDs and Blu-Rays. The deleted scenes were decent and showed a little bit of development of the characters. The features were decent but not sure if the Blu-Ray contains more or not.

Marvel’s Agents of S.H.I.E.L.D started out kind of bland and generic but the season got a lot better around the middle of the season. Season 2 has potential to be even better and continue the momentum of Season 1. I’ll start watching the series again and see how it goes, but I liked binge watching all these episodes.

Journey Into S.D.C.C. – Hop on the bus and share the thrill of a lifetime as the series makes its first-ever appearance at San Diego Comic-Con, where the cast is welcomed with open arms by a sea of enthusiastic fans
Marvel Studios: Assembling A Universe – Journey deeper into the Marvel Cinematic Universe and get a glimpse of what’s to come
5 Behind-The-Scenes Field Reports – Get exclusive access to the show’s classified sets for the making of some of your favorite episodes
VFX Progressions – Explore the layers of effects in sequences with split-frame comparisons to the final versions
Audio Commentaries With Filmmakers & Cast
Bloopers
Deleted Scenes

ABC pulling Don’t Trust the B in Apt. 23 from lineup. Um why?