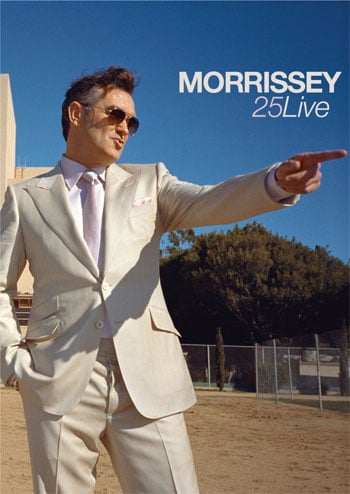 This isn’t the first DVD/Blu-Ray from Morrissey but the more live performances from him, the merrier. 25: Live was shot in Los Angeles at Hollywood High School back in March and any fan of The Moz will want to own this DVD, or Blu-Ray.


The film starts out with some fans talking about how much they worship Morrissey. Then there’s some quick behind the scenes footage of Morrissey rubbing elbows with celebrities and then the King of Mope takes the stage. He started things off with “Alma Matters” and then went into the older “Ouija Board, Ouija Board.” This concert was mainly a glance over his 25 year career, playing old & new tunes from his solo career but throwing in some classic Smiths songs as well. Some of the highlights for me was hearing “You Have Killed Me,” “That Joke Isn’t Funny Anymore,” “Please Please…,” “Everyday Is Like Sunday,” and “The Boy With The Thorn In His Side.”

Throughout the evening, Morrissey would hand the mic to fans in the front and they would kiss his ass, I mean gush over him. You can tell that these people in the crowd were hardcore fans since this show sold out in 12 seconds. Towards the end of the show, they were crowd-surfing and trying to touch him. Sometimes they would succeed, others wouldn’t. I only saw Morrissey live once but definitely remember those moments of everybody trying to give him roses and touch him. People love their Morrissey and they will love this concert that has 19 songs in total. There’s a couple of extras on DVD like behind the scenes footage and some sessions. I was sent a DVD so not sure if the Blu-Ray has anything different on it besides better quality. Would obviously prefer the Blu-Ray if I was buying this.

Features:
Studio in-session
Behind The Scenes At Hollywood High
& more!