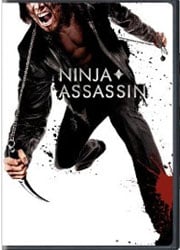 Ninja Assassin is the latest action flick to hit DVD and Blu-Ray from Warner Bros. The Wachowski Brothers produced this movie so I’d thought it might be decent. While some fans of kung fu and ninja movies might like Ninja Assassin, I thought it could have been a lot better.

The movie is about a ninja called Raizo (Rain), who was raised by the Ozunu Clan. They are the most deadly ninja clan in the world, and conduct assassinations across the globe. As a kid, Raizo would go through strenuous training exercises and be constantly whipped and cut if he didn’t succeed in his training. He’s also taught to harm other ninja brethren if they fail as well. The only person he connects to is a girl who wants to be free from the ninja clan just like him. One night she escapes, but is quickly caught and executed in front of Raizo. From that point on, Raizo vows to get back at the clan and stop all their assassinations and harm to others. Europol agent Mika Coretti (Naomie Harris) starts to investigate linked murders to the clan and gets caught up with all of that. Raizo steps in and saves her life a few times. Mika tries to get down to the bottom of things, with the help from super badass ninja Raizo.

I don’t know what it was about Ninja Assassin but I just didn’t like it. I didn’t have any expectations for it to begin with, but I was kind of bored with the movie. The action was decent, but the story could have used a lot of work. It was a bit too slow for me and I just didn’t care after awhile. I could have used less of the fake, CGI blood splatters. It was so over the top and overdone that it was comical. I doubt you can get that much blood from killing someone right in the shoulder. I think the director was trying to do something 300-ish, mixed in with kung fu movies. I don’t think he did a good job with that. I didn’t like the way they made the ninja ghost-like or super human that teleport pretty much. It was stupid. Why can’t someone just make a kung fu movie where they actually just do basic kung fu, and not have to fly in the air (a.k.a wire-fu) or teleport super fast? It’s just silly nonsense.

I can’t really criticize the acting because it was mainly just a few actors and they weren’t that special. I like Ben Miles from Coupling, who’s now gray which is odd to see. He’s a good actor though, and glad to see him doing some other movies besides this and V for Vendetta. Rain who plays Raizo was badass with his kung fu moves, too bad the movie stunk. You might recognize Naomie Harris from Pirates 2 and 3, and she did an okay job. Her scene at the final fight was really funny (not on purpose). I couldn’t help but laugh during that scene.

The only extras on this DVD were additional scenes. Seems Warner Brothers DVDs are either included just deleted scenes or nothing at all lately. If you like kung fu movies, I’d say rent this one before buying it. I didn’t like Ninja Assassin and thought it could have been a lot better.