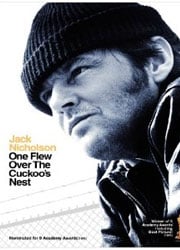 One Flew Over The Cuckoo’s Nest was one film I’ve always heard people talk about but I never had a chance to see it until now. I thought the movie was excellent, featuring awesome acting from Jack Nicholson and an interesting storyline that I’m sure is still talked about to this day. The Ultimate Collector’s edition DVD and Blu-Ray came out back in late September and it’s something to own if you love the movie.

The movie is centered around Randle Patrick McMurphy (Jack Nicholson) and a mental institution. McMurphy is transferred from a work farm, where he has been working hard labor in prison and wants a more relax environment. He’s been guilty of statutory rape, and other crimes. He isn’t really mental in-stable but definitely has a hard time dealing with authority and is a rebel. At first, he thinks its a cake walk and antagonizes the head nurse, Nurse Ratched (Louise Fletcher). Ratched is a tyrant bitch and subtly belittles her patients and gives out punishment for stupid stuff. Basically, jail actually seems nicer than there. McMurphy begins to ruffle the feathers of the hospital and awaken the patients to live better and stand up to Ratched. Randle wants to take down Ratched and her dictatorship ways. Among the patients is Big Chief (Will Sampson), believe to be deaf, dumb, and a mute; Billy (Brad Dourif), stuttering and suicidal; Harding (William Redfield), high strung but well educated. While Randle only thought he was going to be in the mental institution for a little bit, he learns the hard way that it might be harder to leave than he thinks.

This was released back in 1975 and I believe its still relevant today. It’s a thought provoking movie and brings up debate on how you treat patients like this. Like Jack Nicholson’s character, I would have done the same stuff he did but then I’d probably end up just like him as well. I simply despised Nurse Ratched and was cheering for her to die. But alas, that didn’t come to be I’m afraid. Would have made the movie more enjoyable if that was the case. I liked that the movie had a mixture of comedy and drama, but to me it’s more of a drama than anything. From seeing the movie finally, I noticed how many other movies or shows have been influenced by this story. I can think of Shawshank Redemption and shows like House that have been influenced by this. What makes this movie is the performance of Jack Nicholson. The subject matter is intriguing and the supporting cast like Brad Dourif, Danny DeVito and Christopher Lloyd as well but definitely this movie is what it is thanks to Jack.

For being a movie from the 70s, the video looked okay on DVD. I’m not sure how it looks on Blu-Ray but I can only imagine it’s just slightly better. Since this is an ultimate edition DVD, a lot of things are included with the set like a hard bound book about the movie & filmmaking, some playing cards which I’m assuming has the cast photos on them, poster cards and cast cards. There’s a great documentary about the filming of the movie, and also has a new interview with producer Michael Douglas. Never knew he produced this movie!

If you never watched One Flew Over the Cuckoo’s Nest, there’s no better time then now to watch it! The Ultimate Collector’s Edition is pretty good but in the end, I only care about the extras like the documentary and not the other goodies like cards and playing cards. While it’s nice to have, to me it’s just more junk that’s laying around my apartment.