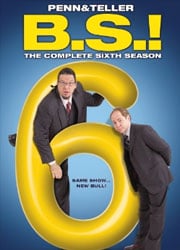 Penn and Teller are back with another hilarious, intriguing, thought-provoking season of Bullshit! Since I don’t have Showtime anymore, I look forward to every release now. This season may not be as good as other seasons, but it’s still an awfully funny show that will make you either laugh or get pissed off at what they are saying.

I’m glad Penn & Teller went after people for being green, because I think it’s a movement that’s not really going to matter in the end. Sure, a lot of things will help out but I think ultimately in the end, we’re still doomed. Or our kids’ kids’ kids are doomed but who really cares about them. I thought the Sleep episode was good, and so was the Stranger Danger episode. For the sleep episode, they show a fatty fatty trying to find the perfect bed to sleep on in a Vegas convention. Everyone tries to sell the guy a bed that will cure his insomnia, which it doesn’t. The Stranger Danger episode showed both sides of kids being over protective by parents and ones being let to do what they want. I’m not sure what I would do but I think parents need to find that balance for their kids to explore things on their own and being protective of them at the same time. I found the dolphins’ episode to be funny and so was the new age medicine episode. I can’t believe the crap people try to sell to others to make them better. There’s some treatment in that episode that will make you laugh out loud.

Season 6 of Penn and Teller Bullshit is funny, and makes you think at the same time. But mostly it’s just another entertaining season and it makes me want to buy Showtime to see the next season. Season 7 airs June 25th and it’s about orgasms. So that’s gotta be a good one! But if you enjoyed the previous seasons of Penn & Teller, than might as well check this one out as well. If you hate these guys, then don’t bother watching this.