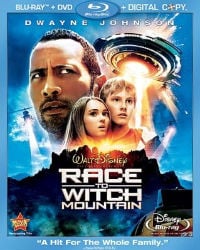 Dwayne Johnson is back with another Disney film, and it’s the Sci-Fi “remake” Race to Witch Mountain, which is a fun family film that the whole family will enjoy, well mostly the kids. Loosely based on the Alexander Key’s novel, the film is about helping two alien teenagers escape danger on Earth and also save their home planet back home. This film set features the Blu-Ray, DVD and Digital Copy versions so you have no excuse to miss out on this film. Not the greatest thing you will watch but it can be certainly entertaining.

The Artist Formerly Known as “The Rock”, Dwayne Johnson stars as Jack Bruno, a cabbie in Las Vegas who is trying to stay on the straight path to redemption. Unsure his past will catch up with him, Jack Bruno somehow manages to get two mysterious teenagers in his car on the way back from some trouble with the locals. On his way back to the city, he realizes that they are not two ordinary kids but actually aliens from another planet. Of course sarcasm and non believability comes with that, but after the kids convince of him such, Jack is very protected of the kids and why they are here on Earth. It’s all part of some plan to stop their alien race from taking over Earth and all its natural resources so that they can help fuel their planet back home. The children are trying to race back home to stop it. The lovely Carla Gugino plays Dr. Friedman who is speaking at UFO conventions in Vegas on ideas that there are others out in the Universe, is brought into the scenario after Jack drove her to the convention earlier in the evening. From there, he remembers that she could play a part in all of this and drags her along into the mess with the kids as everyone is after these kids since they crash landed on Earth. The secret government agents are in hot pursuit and also someone from their own planet that is like a Terminator but not as cool, called Siphon. Y’all never guess where everyone is headed? You got it. Witch Mountain!

This film is really meant for family audiences as I am not really into that demographic, I was rolling my eyes a little bit. Some of the effects were pretty cheesy and could have been better. Dwayne Johnson and Carla Gugino were good but didn’t have much to work with. The movie had a good cast but the story was decent, not the greatest. It’s fun for the kids, and that is what counts so families will probably really enjoy this one. What’s great about Disney Blu Ray, besides they include a copy of the DVD and a digital copy, is that the films always look amazing in high definition on Blu Ray. The colors are always so vibrant and clear. The blacks are rich and deep and the audio is excellent with lots of bass. The set did not really have any extras, besides deleted scenes and bloopers which were not in high definition the scenes themselves but the intros to the deleted scenes from the filmmakers were in HD. Generally, I enjoyed the film but I think this is more for the kids.