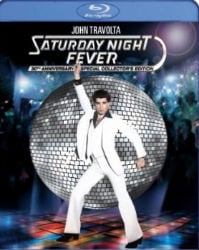 A staple of the 70s, Saturday Night Fever was one of those films that defined a decade. With this film, it showed what life was like in the late 70s in New York. In his first starring role, John Travolta plays Tony Manero, a 19 year old who works at a Paint Shop and spends all his money on the weekends, dancing the night away. The film is considered a classic, and I can see why especially for those who grew up during this time.

Tony Manero was working a dead-end job as a Paint store clerk, and using his wages to go out partying on the weekend and dance. When Tony danced at the local disco club, everyone stopped to observe. Tony felt like he didn’t know many things in life, but one thing was dancing. Everything seemed to be holding him back from an unknown future. He still lived at home with his parents, who were more proud of their other son who was a priest. All of Tony’s friends were not going anywhere either, with no aspirations and only out to cause trouble in the neighborhood. All Tony had going for him was his dancing ability, and his pipe dream of actually being able to do something with it in the future. For now, it was useful to try and win the dance contest.

The film was supported by one of the biggest selling soundtracks of all time, with the Bee Gees and other 70’s classics, and it really helped give the movie a great music vibe. In cinematic history, how many songs can associate with one character like the Bee Gee’s “Stayin’ Alive” when John Travolta’s character makes his grand entrance in the film? John Travolta’s first film as a headline star brought an excellent performance and was nominated for an Oscar for it. The cast was excellent as well as the locations. This film really embodied what it was like to be in New York in the late 70s. The extras had some great featurette’s that takes the fans back in time with the cast and crew as they discuss what it was like to be part of such a big film. Most of the extras were seen in high definition as well which was nice to see as most extras still don’t make the transfer over. Some of the topics discussed were ranging from the hugely successful soundtrack, featuring the Bee Gee’s, and also the fashion and music of the 70’s. If you really are into 70’s, you will enjoy the 70’s discopedia feature where it’s like a pop up video while watching the film. It offers “tid-bits,” trivia and other facts surrounding the film and the time in which the movie takes place. The movie overall looked great in high definition. Widescreen format and for a film that was shot over 30 years ago, the transfer looks very clear and strong. The colors are vibrant, and nothing seems stale.

Fans of the 70s, disco, and John Travolta will definitely want to grab this version of the film. I know other releases have come out in years, but what’s a better way to watch, than in high definition where you won’t find any better quality than this release? John Travolta turns in an excellent performance, and while I found most of it hysterical, it was a good film.