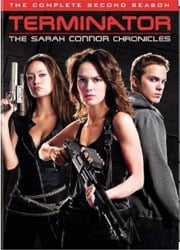 The second season of Terminator: The Sarah Connor Chronicles is now available on DVD and Blu-Ray from Warner Bros. While the second season solved some of the problems with the first, there are still loads of problems with the not renewed Fox TV series. If you enjoyed the first season, you’ll most likely dig this season as well. It’s just frustrating to watch 2 seasons of a show that’s not continuing on.

The TV series follows Sarah Connor, her teenage son John Connor, their personal sexy fembot Terminator Cameron, and John’s uncle from the future, Derek Reese. The end of the first season, Cromartie wiped out Agent Ellison’s squad & friends, and Sarah, John and company were after a super computer called the Turk. The season ended on Cameron getting blown up in a car. The beginning of this season, Cameron’s chip is busted and she starts to act all weird. Her programming is reversed and she goes after John and Sarah Connor until they find a way to fix her. Meanwhile, Agent Ellison is haunted by what happened to his squad, and wondering why he was sparred. He eventually ends up at the company ZeiraCorp, lead by CEO Catherine Weaver. Weaver ends up being a T-1001 who can morph and kill people at will with her metallic hands. You don’t know whether or not she’s good or bad until the end of the season. Sarah’s old boyfriend Charley keeps popping up in episodes and you can get the sense that he cares for them still, and vice versa. Cromartie the terminator is alive for the first half of the season, but everyone finally terminates him eventually. His body is recycled at ZeiraCorp and used for a super computer called John Henry. While this is all happening, John is still being a whiny teenager but he starts to date this girl called Riley. Also, a resistance fighter that dated Derek goes back in time to relax and hatch new plans, and start anew with Derek. In a nutshell, that’s pretty much what happened this season.

Terminator: The Sarah Connor Chronicles’ second season started out well but then I just lost interest halfway through the season. I knew it was a matter of time for it to get canceled, and I was right. Fox is just notorious for canceling shows or not renewing them because they rather air stupid reality shows instead. I didn’t want to invest anymore time in a show that was going to get canned. But figured I watch the remaining episodes on DVD and find out how things ended. After seeing it, it’s really frustrated because it ends on a cliffhanger. I guess we’ll never know the things we saw. Oh well. The show was something I enjoyed watching when I watched it, but I just ended up sick & tired of trying to catch up on the episodes on my DVR. Basically when it came down to it, I just figured I didn’t care either way if the show continued or not.

At times the show was like 90210: the Terminator Years and I think that was its biggest fault. Another fault is it was way too slow moving but I think it’s because the creators didn’t know if they were continuing the show or not. Unlike LOST where they have an end date, most shows don’t so they take their time with the storylines. The characters I liked on the show weren’t always featured and felt Brian Austin Green’s character should have been featured a lot more. I didn’t like the addition of Shirley Manson of Garbage. She’s just not a good actress; unless the lines were so cheesy that it made her look bad. I don’t know, her character eventually grew on me though and she wasn’t as bad towards the end. I wish Dean Winters’s character was featured more and not just some minor character.

The DVD extras are great and worth checking out after you see the episodes on DVD. Featurettes are broken up in numerous segments that are all decent length. There are 8 parts in total and are very interesting. You see how the episodes are thought out, see how things are behind the scenes, fight rehearsals and things like that. The gag reel is actually quite funny, considering its suppose to be a serious drama. Thomas Dekker seems to be the one that messes up the most. But don’t worry, everyone chips in and messes up their lines or bangs into things.

Terminator: The Sarah Connor Chronicles ended on a good note and it made people want more episodes. But the question is, will Fox and Warner Bros bring it back just because a limited, dedicated fanbase wants to see what happens? Doubtful. But maybe there can be a one-off episode that gives the fans some closure? If not, people will just have to guess what happens. I’m not sure which season I liked better but there’s definitely some things to like/dislike about Season 2.