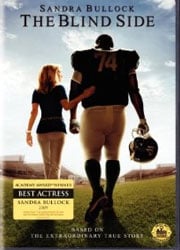 The Blind Side surprised me a bit. I wasn’t expecting to like this movie this much. Sandra Bullock just won an Oscar for her performance in the movie, and the film was also nominated for Best Picture. Thankfully I decided to watch this movie because I ended up really liking it.

The Blind Side is about a young (big) man named Michael Oher (Quinton Aaron) who’s homeless and goes from family to family in Memphis. He doesn’t really know his real family and doesn’t stay in one house for too long. One day while walking in the rain, Leigh Anne Tuohy (Sandra Bullock) and her family pick up Michael and have him stay at their fancy, big house. Michael is very shy and doesn’t talk much, but you can tell he likes staying at the Tuohy’s house. Who wouldn’t!? While leaving the next morning after staying there, Michael is asked by Leigh Anne to keep staying at the house. Eventually Leigh Anne and her husband Sean (Tim McGraw) become Michael’s legal guardian. While that’s happening, Michael tries out for the football squad and doesn’t really know much about the sport. Michael bonds with Leigh Anne’s little son, SJ (Jae Head), and he starts to help Michael out with it. He teaches him the technical parts and trains him as well. At first Michael doesn’t grasp the sport too well, not until Leigh Anne gives him some advice. He becomes such a force on the football team that colleges begin to take notice and try to recruit him. But like with most sport movies, drama ensues with Michael’s grades and NCAA begins to investigate things as well.

Before watching The Blind Side, I thought this movie was going to be like any other sport movie. But after seeing it, it’s a bit different or if anything, better than the other movies that are similar to it. The acting and the story are far better than most sport movies that I’ve seen lately. I think Sandra Bullock was great as Leigh Anne, but I’m not sure it was an Oscar worthy performance. This was definitely one of her better roles, I just don’t know if she deserved the Oscar per say. She definitely looked hot as Leigh Anne and I usually don’t find her super hot in roles. Maybe it was the blonde hair and the MILF-y outfits? I think Quinton Aaron should have been at least nominated for his performance. I don’t even think he was invited to the Oscars from what I read. That’s kind of insulting if you ask me. Tim McGraw did a good job as well and it’s nice to see a musician start acting in more and more movies (and do it well).

I think besides the acting, the story is something interesting. Seeing someone that was homeless, quiet and generally not harmful to people and becoming a huge college football star is an amazing story I think. I don’t usually like football, but I love football movies for some reason. I think Blind Side succeeds more as a drama than a sports movie, because the audience is far more invested in that part of the story. The football stuff is just secondary and serves as a setting to the story. I just liked seeing Michael mesh with the Tuohy family. I think the movie makes you appreciate families like Tuohys. Where they take in someone whose been in trouble, homeless or poor, etc. and give them another chance to do something better with their lives. I also think the movie made me want to know more about the real life family and I’m curious to see how Michael plays in real life. He currently plays for the Baltimore Ravens, and was drafted by them in 2009. I couldn’t believe this story was still relevantly new. At the end of the credits you see the actual footage of Michael getting drafted and you see real photos of the family. It’s a nice touch to end the movie.

Deleted scenes are the only extras offered on the DVD. There’s about 4 or 5 quick scenes of them. One is Sean Tuohy offering Michael some money for lunch at school, then that thug at Michael’s old neighborhood tries to hit on Leigh Anne some more. I could see why they were cut but in the end, the scenes weren’t that bad.

The Blind Side may seem generic to some, but I don’t think it is. I thought the movie had an excellent story, and the acting was really good as well. If I saw this movie last year, this would have been on my best of the year list. I actually think a movie like this deserved to win over the Hurt Locker but that’s just my opinion.

Bottom Line: I thought The Blind Side was one of the best movies of 2009
Running Time: 128 mins
Rating: PG-13
Extras Rating:
Overall Rating: