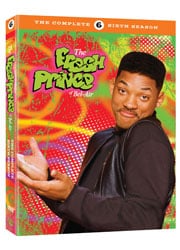 The final season of Fresh Prince is just as good as any season, and it’s finally available on DVD. Fans waited awhile to get to this point, but if you want the seasons on DVD, now is your chance to get the last season.

Everyone should know what the show is about, so no need explaining details about the series. The Fresh Prince of Bel Air Season 6 starts off with an episode Will decides to be Will and almost burn the house down. He just wrecks the kitchen, which makes Uncle Phil and Jeffrey “very” happy. The beginning of the season focuses on Hilary and her talk show. Will ends up getting a job there, helping out which causes some amusing episodes. Towards the end of the series, The Banks decide to sell off their mansion and head back East. Ashley gets a modeling career in New York, Hilary’s talk show gets moved to New York, Carlton goes to Princeton finally and the Banks soon follow to be close to their family. Will realizes he hasn’t achieved anything really and decides to stay in California to continue to go to school. The final season has 24 episodes and features guest stars William Shatner, B.B. King, Dick Clark, Richard Roundtree, Wayne Newton and Chris Rock.

This season was funny, just like the rest of them. Just from watching the episodes, you can clearly tell this was the final season and things were started to get stretched thin with ideas. There’s only so many things that Will could do to piss Uncle Phil off or so many times he fights with Carlton with. But with that said, it’s something about this TV series that always made me laugh and always wanted to watch it when it airs. There’s just so many sitcoms from the ‘90s that I love, and this is one of them. I think I even got a little choked up for the finale when it originally aired (for some reason).

Some of the stand-out episodes in this season include Will pretends to be Carlton do a Princeton interviewer, Carlton spends Will and his money in Vegas and they have to enter a contest to get home, Will encounters a female boxer and shows him a thing or two, and of course the two part finale. I wouldn’t say this is the best season but it’s still a funny one that ends on a good note.

You can find details about the DVD here: http://www.freshprincedvd.com