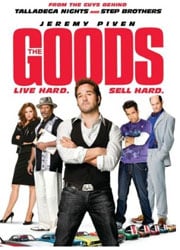 I wanted to see the Goods in the theater this summer, but I decided to just wait it out until it comes out on video. Two things that were concerns of mine: the movie was less than 90 minutes and the film came out in August. That usually means that the film isn’t the best thing in the world. Let’s just say I’m glad I didn’t see this in the theater.

The Goods is about a car dealership that is failing and needs to be turned around quickly. Ben Selleck (James Brolin) deceives to bring in cars salesman mercenary Don Ready (Jeremy Piven). Don and his team promise Ben that they will sell ever car on the lot before the end of the 4th of July weekend. The competing dealership lot owner’s Stu (Alan Thicke) and Paxton (Eh Helms) tell Ben and Don if they don’t sell all the cars on the lot by the end of the weekend, they are buying the dealership. Meanwhile, Don falls in love with Ben’s daughter Ivy (Jordana Spiro). Who’s also Paxton’s fiancée and he tries to get with her while trying to save her Dad’s car dealership. That’s the basic storyline pretty much.

I thought The Goods might be better than it was, since the critics sometimes don’t know what they’re talking about. Sadly, I have to agree with them this time because this comedy is just bad. There are a few funny moments in the movie but honestly, I couldn’t even tell you what they were. The scenes weren’t that memorable, which sums up this movie. The jokes are flat, the acting is sub-par (even for a comedy) and there are sight gags and dumb jokes just for the sake of having them in the movie. Don’t be fool with all the character actors starring, because I’m sure they are trying to forget they even did this movie.

With all the success from Jeremy Piven, you’d think he’d pick better projects. This seems like something he would have done before Entourage…or even before PCU for that matter. And what’s with the ridiculous hair piece? Will Ferrell makes a cameo as Don Ready’s mentor, and that scene is okay. Even if Will Ferrell was in this entire movie, it wouldn’t have made this movie any better. The story is just stupid, but it definitely had comedy potential.

I’d talk about extras but there aren’t any except trailers. I guess that’s too be expected since this movie didn’t make a whole lot of money. I’d be pissed if The Goods was good and there weren’t any extras but I’ll let it slide this time. I don’t recommend seeing The Goods, but if you’re bored and curious, rent it.