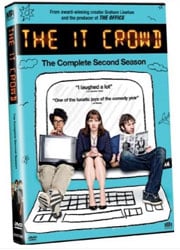 The IT Crowd is another UK series I’ve heard about but haven’t seen until recently. This quirky show airs on Channel 4 in the UK and sometimes airs on IFC in America. The first season was released on DVD in March; originally it was suppose to come out in 2007. Thankfully, the second series didn’t get pushed back and is out now! If you like sitcoms like The Office, Coupling, and The Mighty Boosh, you’ll really like the IT Crowd!

The series is set at Reynholm Industries, a British corporation that’s located in London. It focuses on 3 employees of the IT department. Their offices are located all the way in the bowels of the office building, with no windows and where no one goes. Jen Barber (Katherine Parkinson) is the head of the department, but doesn’t have the slightest idea about computers. The two resident nerds that work in the IT dept are Roy (Chris O’Dowd) and Moss (Richard Ayoade). Both are socially awkward around women and just about everyone in general. They’re sort of an old married couple who bicker but like the same stuff. Roy is from Ireland and wears different geek shirts each episode. Hmm sounds like me but just replace geek shirts with band shirts. Moss is the smart one with the afro. They are both so bored of all their co-workers and always get asked the same question. They usually start the phone conversations by saying “Have you tried turning it on and off again?”

This season starts out with one of the funniest episodes of the entire series. They get invited to a musical with Jen and this guy she’s trying to date; only it’s not the type of musical they thought it would be about it. It’s called “Gay: the Musical.” Eventually Roy pretends he’s handicapped and Moss gets stuck serving people drinks at the bar. It’s quite absurd and funny, but you’ll just have to watch it to figure out what happens. Other plotlines in the season include: Denholm’s son becomes president of the company, Roy finds out when he’s going to die based on a website predication, Jen invites Roy and Moss over for a dinner party, and Moss develops an ultra-comfortable bra called “abracadabra bra.”

I’m glad I found out about this show and gave it a chance. Now I’m telling everyone about it and recommending it. It’s not for everyone but if you like UK comedies, you’ll more than likely enjoy this. The characters are hilarious, especially Moss and Roy. Moss reminds me a little bit like Richard Coyle’s Jeff on Coupling. They are both hysterical and have their little quirks. I like how Chris O’Dowd is Irish on the show and the creators didn’t make him change his voice to British. There are not enough Irishmen on TV shows, especially comedies. Katherine Parkinson has her moments too, she reminds me of some of the actresses on Man Stroke Woman. Not sure why that is. But the trio work well together and just sucks there aren’t more episodes. I know British sitcoms only do 6 episodes but that just blows. Noel Fielding’s (of the Mighty Boosh) character is really out there but really funny. Who would have thought having a Goth vampire guy on a geeky/office comedy would be funny but it is!

The second season is by far the funnier of the two seasons I’ve seen so far. The first couple of episodes of the first season were funny, but the show doesn’t find its nitch until around the 3rd or 4th episode. I’m sad Denholm isn’t really on the show anymore because he was a weird yet hilarious boss. His character is someone who’s really arrogant and full of himself. But his son definitely fills the void of being an eccentric boss. Storylines are better this season, and each of the main characters gets their chance to shine. The office part of the show seemed to slowly disappear from the show. I kind of liked the office humor to it, but there seems to be too many comedies about that now. I guess the IT department is just the setting of the characters now? I’m really looking forward to seeing season 3, whenever that will be released in America.

The DVD extras include a commentary with the show’s creator Graham Linehan, outtakes and filming the show with an audience. I didn’t bother listening to the commentary but the outtakes were pretty funny. Just a lot of clips of them messing up there lines and repeating them over and over. I don’t know how actors can do it. Once you hit that giggle loop, it takes forever to get that straight face back. The recording of the IT Crowd featurette was cool to watch. A lot of the audience members were interviewed and didn’t realize that the show is filmed in different segments. I’d actually hate to see something like that because everything is filmed that way. Plus, you have to see them film the scenes over and over again.

IT Crowd Season 2 is even funnier than the first season. If you’ve never seen an episode, rent the first season just to catch up on things. Don’t worry; it’s only 6 episodes per season. I highly recommend checking out this show and this DVD!

Features:
Commentary With Graham Linehan
Outtakes
Recording The It Crowd