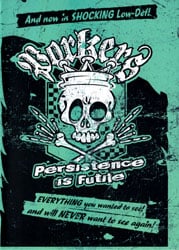 The Porkers, Australia’s own, are one of the hardest working band’s from Down Under, and finally fans can rejoice with a DVD celebrating over 20 years of Pork-tastic Clips from the band! Pete Porker and Co. have really put out some fun, fantastic material over the years and the beauty of this DVD is that all the music videos and clips are in one place!

Looking back at how the band started out with some video clips like “Earthquakin'” it’s great to see the band’s talent has risen since then, and though it’s fun, The Porkers are a better band today than they were back twenty years ago. I suppose any band should have gotten better over that time period, but hey, some haven’t. While the DVD isn’t a complete retrospective, it does feature all the music videos from The Porkers like “Big Backyard,” “Perfect Teeth,” and new hits like “Sangria” and the now even more humorous song “Swinging Like Tiger Woods.” The DVD bonus features some clips from TV Shows that The Porkers performed on as well as some friends of the bands clips like Los Capitanes and Dr Raju. Extras also featured The Porkers in studio as well as various parts of the World on tour. It’s unfortunate the band couldn’t gig over in the states, but The Porkers are big in the Australian music scene, and have performed at all the big festivals like The Big Day Out. The DVD is in PAL so if you don’t have a DVD that plays that, you could at least watch on your computer here in the US.

I did have the pleasure of catching The Porkers in 1998 play the Wetlands in New York. I was on vacation at the beach, and cut the trip short so we could head in and see the band perform and they certainly did not disappoint. I wish they played over here more, but the same could be said for US acts going to Australia.

“Persistence is Futile” is a great, fun stroll down memory lane, and remembering what Ska used to be like. Now it’s filled with not many bands, most of whom quit, grew old, or just went on to the next Fad. The Porkers themselves don’t gig as frequently these days but at least Pete Cooper and his band mates try to play a few times a year to keep the fans happy, and also do work through their label, Sound System. If you are not sure who the hell I am talking about and love Ska music, you have not done enough research into the third wave of Ska and the bands involved. The Porkers are one of the best ska hybrid bands out there, playing a mix of Ska, Punk, Rock and Reggae and it’s one hell of a ride.