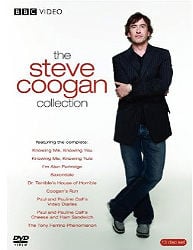 At last, Steve Coogan is readily available here in the States, and it’s not some guest starring role in an American series. BBC has released a 13 disc DVD box set collection featuring all of Steve Coogan’s work with the BBC, including excellent characters like Alan Partridge, and Tommy Saxondale. Coogan’s work is under appreciated here and not really known for his famous characters, but now that this massive collection is available, fans can rush out and laugh for days.

If you’ve never heard of Steve Coogan, well than shame on you, because he’s a brilliantly talented comedian from England who has been performing in award winning comedy shows for nearly two decades. Earning Coogan three British Comedy Awards and two BAFTA’s, was his lovable and self absorbed dolt, Alan Partridge, and with this set you get every series involving this wonderful character of his. Knowing Me Knowing You, Knowing Me Knowing Yule (Partridge’s Christmas Special), and two series of I’m Alan Partridge are all included. Knowing Me, Knowing You gave us a first glimpse into this masterful character created by Coogan. Steve Coogan transports himself into this comedic character and has fixated him into an icon for it. Alan Partridge in this first series, has a talk show at the BBC Television Centre and overuses his love for Abba, by using them for the theme tune. Partridge comes off with such incompetency that you find the character endearing because he just does not know better. Before there was David Brent of the The Office Uk, or Michael Scott of The Office US to Americans like myself, there was Alan Partridge. Cringe-worthy comedy is another way of putting it. Partridge conducts interview after interview by nearly insulting every one of his guests, and has no qualms about it except his own self worth. I find him to be one of the greatest comedy characters ever created. This show is that funny!

If that wasn’t enough of a collection for you, Saxondale is also included which was put out a few years back in 2006 and 2007. Saxondale is about a man, Tommy Saxondale who has seen it all as a Rock N Roll Roadie who has toured the world with band after band. Now, he’s home, retired from that line of work and dealing with normalcy as a Pest Exterminator. Tommy also has issues with his anger and each week continues to mock Anger Management group therapy sessions which sometimes are the funniest bits of the show. Tommy Saxondale is no longer a young lad and age has caught up to him and it’s humorous how he deals with it. Alongside Tommy is his girlfriend, Magz (Ruth Jones) whom you recognize from Little Britain fame, and seems to be the only one who can put up with Tommy and his crude rock n roll behaviors. Not as outrageous as the Alan Partridge character but still funny and also shows a warmer side to Coogan’s characters.

Continuing with the rest of the collection, which features some of Coogan’s earlier and hard to find material outside of his popular characters. Dr. Terrible’s House of Horrible, The Tony Ferrino Phenomenon, Coogan’s Run and Paul and Pauline Calf’s Video Diaries round out the box set, and for me, these weren’t as strong as Alan Partridge and Saxondale. Dr. Terrible’s House of Horrible is a comedy horror series, with Coogan in seven different roles, and the tales surrounding those characters. Coogan’s Run is a character based series, with different characters featured in each episode, all taking place in the fictional town of Ottle. Of course Coogan is there again, as different characters.

Here is the complete run down disc by disc of what you can find on this box set.

Fans of Steve Coogan will absolutely love this box set, and really any fan of comedy should pick this one up, just in time for Christmas too! For me what made this box set was the inclusion of all of Alan Partridge and Saxondale’s series. I didn’t warm up to Coogan’s other lesser known series on this set, but with time, perhaps I will. I truly believe without Alan Partridge, you would not have some of the comedy shows out there today. Coogan was before his time with the creation of that character. Watching these series on lunch at work in the parking lot, people must think I am deranged to be sitting in my car howling laughing like a lunatic with the windows closed. Saxondale is another great series, and although different from his previous work, it still provides plenty of laughs.