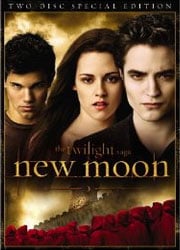 The Twilight Saga: New Moon, the second movie in the four part series comes out on DVD and Blu-ray this Saturday. In my opinion, New Moon is an obvious improvement from the first Twilight movie, but it still has some flaws to be worked out.

New Moon was probably my favorite book out of the entire saga because it was the most emotion-rich and really brought to life the friendship between Jacob (Taylor Lautner) and Bella (Kristen Stewart). Some fans may have found this book/ movie to be a bit of a let down because of the lack of Edward scenes, but there are plenty of hallucination-like appearances of him in Bella’s dreams and when she experiences danger. However, fans of Jacob are likely to love this movie! One aspect of this story that I really like is how it portrays the breakup of Bella and Edward (Robert Pattinson). Although Bella is severely broken, she’s able to take her mind away from the pain for a little while by concentrating on her growing friendship with Jake. When he later develops feelings for her it begins to complicate their close friendship, since Bella will always pick Edward in the end.

I think the cinematography and special effects in this movie are far better than the first Twilight film. This is probably due to the increase in budget after the first movie achieved so much success. The look of a film is something very important when turning a book into a movie; fans need to see on screen what they pictured in their minds and New Moon does that extremely well. Now I haven’t read the book in a while, but I don’t remember much that was actually cut out of this movie aside from Bella’s after school job at Newtons Store, which is another thing I really loved about the movie. When a book is so good the movie should naturally work to be true to it and leave in as much as possible.

The extras were average. I wished there were more considering how obsessed the fans are. I did enjoy the six-part documentary on how they made the movie. There’s information about how they created the special effects, stunts, and other fun facts about the creation of this movie. They also included some music videos featuring Muse, Death Cab for Cutie, Anya Marina and Mutemath.

The one issue I have with New Moon is some of the acting. While there was plenty of improvement from the first film, some of the actors still need to bring more to their characters. I was really happy they decided to keep Taylor Lautner as Jacob because he played his part well and I can’t imagine anyone taking his place. So I will end this review by saying…Go Taylor for doing such a great job! P.S. – us fans truly appreciated those beautiful biceps!!!