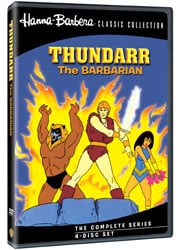 Thundarr the Barbarian was one of the most anticipated animated shows that hasn’t been officially released on DVD and it’s finally here! Warner Brothers released an episode or so on the Saturday Morning Cartoons DVD but now the Complete Series is available!

Thundarr The Barbarian is a mix of Conan The Barbarian, Flash Gordon and Thor, and influenced by Star Wars (it seems) as well. As the intro states, planet Earth is wiped out in 1994 and is reborn 2000 years later. The planet is vastly different and many wizards and warlords rule the territories now. There are creatures, and dangerous animals on the planet as well. Thundarr and a Chewbecca rip-off Ookla The Mok were held captive by Princess Ariel’s father. Ariel helped them escape and the three ride on horseback across the planet to help others out and to battle the evil wizards and people doing harm to others. Princess Ariel has magic powers, Ookla screams and is very strong, and Thundarr uses his Sunsword to ward off enemies. Many of the cities & icons of United States like New York City, San Francisco, Mount Rushmore, DC make cameos on the show. Kind of gives you a nice reference of where the group is during that episode and to show you that you’re still on Earth. Each episode seems the group conquering one thing after another, going from different places and doing different things. But in the end, they always come out victorious.

I’ve been waiting for Thundarr to come out on DVD for a long time. I think it’s been on my list for over 10 years now. For some reason, I thought Hanna-Barbera did this cartoon but it’s actually Ruby-Spears Productions. You have to admit that the styles are very similar, and those guys worked at Hanna-Barbera as well. It’s been awhile since seeing these cartoons but I still found myself enjoying them and getting nostalgic over this and other cartoons I loved growing up. I’m still hoping to see The Herculoids, Shirt Tales, Speed Buggy, Mighty Man and Yuk, Spiderman and his Amazing Friends and others on DVD. I could watch this stuff all day long!

As far as Thundarr is concerned, the show has its moments. It’s a bit silly and unintentional funny now. The way Thundarr has to say his name a million times throughout an episode. Ookla the Mok I used to like when I was younger but older now, I found him to just be a Chewbecca rip-off. When I was little, I had a cartoon crush on Princess Ariel.

What I like about the show is the combination of the animation, music, and the mixture of sci-fi/fantasy/etc. elements. Just watching this makes me think back to Saturday Morning Cartoons and how awesome it was back in the 80s. Even in the early 90s, Saturday morning was still great. Can’t really say the same about today’s programming. When I have children, I’ll no doubt be showing them cartoons like Thundarr The Barbarian, Looney Tunes, and other stuff that I grew up watching. Be sure to buy this DVD at the Warner Brothers shop and not on amazon.com for this release since it’s being sold there exclusively. 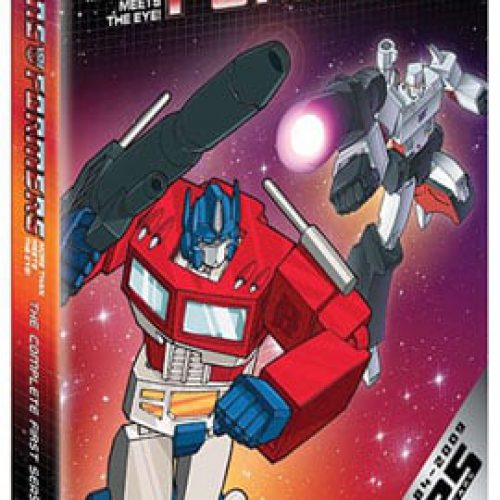