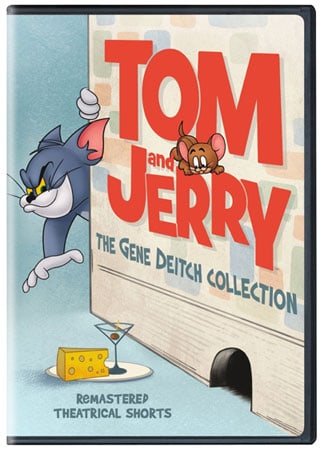 After Hanna-Barbera decided to leave MGM, they called up Oscar-winner animator Gene Deitch to direct 13 animated shorts to show before movies in the theaters. This is the only time the cartoons were made outside the US that this point, and the animators have never seen Tom and Jerry before. The cartoons feature Tom and Jerry sure, but something is different and weird about these animated shorts. It definitely feels European to me and that’s probably why these cartoons are panned by Tom and Jerry fans. It’s just not the same.

Whenever these cartoons use to air as a kid, I either liked them or didn’t. They were very hit or miss and not sure what I didn’t like about them back then. Re-watching the animated shorts now, I can certainly appreciate them but they aren’t the same as the earlier ones. The sound effects and music I think is what throws me off the most. Jerry’s laugh is annoying, the weird human mumbling sound effects are distracting and animation is jittery. Then at times there’s nothing being play in terms of music, as if the cartoon is a silent film. Scott Bradley’s score is really missing from these cartoons.

There are 13 cartoons in total plus two special features “Tom and Jerry…and Gene” and “Much Ado About Tom and Jerry.” The first featurette has Gene Deitch talking and pretty much defending his cartoons. It’s about 20 minutes long so it gives you a nice background on the making of the cartoons. The other featurette is more about the history of Tom and Jerry mostly.

The Gene Deitch collection is what it is, some people will enjoy these and others will hate it. I particularly didn’t care for most of these cartoons since they were too weird, bizarre and just out there. If I never saw Tom and Jerry before these shorts, I might have appreciated these more. The animated shorts are interesting for what they are but you can tell Gene didn’t have the resources that Hanna-Barbera had. Hanna-Barbera Tom and Jerry cartoons are ranked first for me, after that Chuck Jones’ shorts. These would be ranked last.