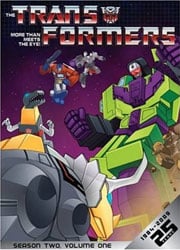 Transformers Season 1, Volume 1 was re-released by Shout! Factory earlier this summer and now the first part of season 2 is available on DVD! While I didn’t get a chance to see season 1 again, I was happy to get season 2 to watch. It’s been ages since I last saw an episode of Transformers but it brings back a lot of memories.

The second season of Transformers was mainly created to get the show into syndication, and introduce more characters (to sell). A lot more characters were introduced including Cosmos, Powerglide, Perceptor, Blaster, Astro Train and Omega Supreme. Each episode wasn’t a continuing storyline like in the previous season but separate storylines were created for each episode to flesh out the characters more. The first episode of the season saw Spike getting injured again in an Autobot/Decepticon battle. His Father Sparkplug decides to transfer his brain over to a spare Transformer he made while the doctors treat his comatose body. Each Autobot or Decepticon gets their own episode pretty much, and the Dinobots are featured a lot more which I liked. Me Grimlock love that! I almost like the episodes that way. Other episodes include: Wheeljack creating The Immobilizer that could defeat the Decepticons, Gear’s personality cartridge is replaced and he becomes a happy robot, Megatron changes the Autobots’ re-chargers to make them attack other Autobots, Mirage is mistaken for a traitor, The Dinobots move to Dinobot Island so they can train and not destroy everything at Autobot headquarters. Plus there are episodes about: 2 Optimus Primes showing up at headquarters and the group has to figure out who’s who, Perceptor, Bumblebee and Brawn shrink themselves and penetrate Megatron’s mind. Plus lots more that I don’t feel like writing out. This DVD contains 28 episodes from season 2. Volume 2 of Season 2 will be out on DVD in October I believe.

Just like the GI Joe Season 1 DVD that was released this summer, I ended up watching this DVD pretty much all day Saturday. You don’t realize how many episodes you watch until you realize its 3pm and you’re still in your pajamas. I really can’t remember if I liked this season better than the original season. I guess I could say that I loved all the seasons of Transformers, and especially liked when they kept adding toys…err I mean characters to the franchise. This season had a lot more characters added to the show to sell toys. Honestly, I never really liked a lot of the original transformers like Wheeljack, Ironhide, Hound and other characters like that. I always like Jazz, Bumblebee, and of course Optimus Prime. You can’t forget the Decepi-pukes like Soundwave, Starscream, and Megatron. Although, it is a bit sad to see pretty much all the original characters get wiped out in the movie. Those scenes will forever be stuck in my head, just because I saw the movie so young and loved Transformers. I actually prefer the characters from the featured movie and beyond that. I used to love watching those episodes in syndication on Sci-Fi before I had to go to high school. I just liked the more updated look to the episodes, and really can’t wait to see those episodes on DVD again.

These episodes are a bit silly sometimes, but not as silly as a G.I. Joe episode. At least they don’t scream Yo Joe every 2 seconds. I loved the look of the animation of 80s cartoons. I just think everything looks too anime now, but Transformers and GI Joe didn’t look as anime back then. As far as the production of the DVDs is concerned, maybe I need to compare the DVD to VHS but I wasn’t really impressed with production. I thought it could have been cleaned up a lot more. But perhaps watching them on a LCD TV, stretched out wasn’t the best idea.

Since this is a 25 anniversary edition of the franchise, I wish they added more extras to the DVDs. Maybe they did for Season 1 Volume 1 DVD but I didn’t see that one. It would be nice to have some retrospectives or voice-over cast talk about the cartoon. Deleted scenes or making-of videos would have been awesome but can’t always get what you want.

If you enjoyed the animated TV series back in the 80s or in syndication; be sure to get this 25th Anniversary Edition DVD. Stay tune for Season 2 Volume 2, which comes out soon! 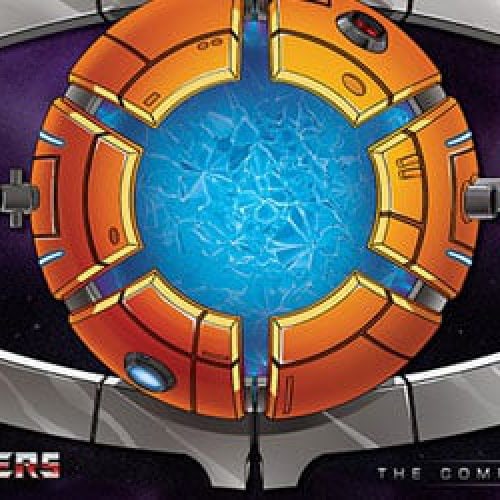