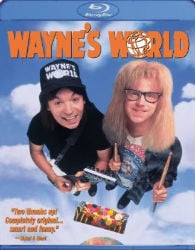 One of the many Saturday Night Live sketches to make it to the big screen, but unlike many of it’s other show counterparts, this film is actually funny. Starring Mike Myers and Dana Carvey as two teenagers who live at home, and run a cable access show in their basement, entitled “Wayne’s World” gain interest from a slimy cable exec (Lowe) who wants to bring “Wayne’s World” to the masses. Funny, low-brow, and hugely popular, Wayne’s World is a great comedy.

As many know, the film premise started out on SNL, featuring Mike Myers as Wayne Campbell and Dana Carvey as Garth Algar. The two are low brow humor teenagers who love heavy metal, celebrity crushes and partying. In the film, Wayne’s World is viewed on public access in the Aurora, IL area and a TV executive Russell, (Lowe) sees the show and dollar signs light up in his eyes. The guys get suckered into a lousy deal for a measly $5,000 bucks each, but hey what teenager doesn’t jump at money like that? Also, Russell tries to steal away Wayne’s girlfriend, Cassandra, the rocker chick who Russell wants to manage but really wants to be more than a manager.

Wayne’s World has many quotable lines throughout the film and since I’ve seen the movie so much now, I can recite them all and it loses some of its humor. Also, most of the jokes are held up against time but some are not. Mike Myers and Dana Carvey really helped develop this characters into much more than the usual SNL sketch bit and to their credit, created characters that everyone in the 90’s would remember. They even popped up on one of those MTV award shows a year or two ago but it seemed like the time had passed for such a reunion. Back to the film, I particularly loved the scenes in which Wayne and Garth and their buddies are singing along to Queen in the car on the way to Stan Mikita’s Donuts. A classic scene. The others I really enjoyed and was still laughing out loud for were the rehearsals in the new studio for their new show. It was funny to see what “Green Screening” was like back then and how much TV has progressed since then.

Only one featurette that is about 23 minutes in length is the only noteworthy extra feature on this Blu-Ray set. It’s not in high definition but if you certainly didn’t catch this featurette before, it has some interesting fun facts about the film and how the characters were created. It includes cast and crew interviews and a look back at some scenes in the film. The movie held up nicely with the transfer to Blu-Ray. I didn’t notice too much film grain and the colors in the film looked solid, with nice blacks and depth to it. The audio was in TrueHD 5.1 surround sound for all you audio nuts as well. If you are a fan of SNL and Mike Meyers, picking up this film on Blu-Ray is definitely worth it as is the sequel, Wayne’s World 2.