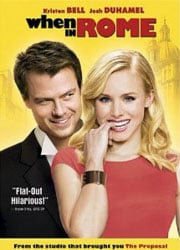 When In Rome has come and gone from movie theaters with a blink of an eye and it’s probably going to do the same on video as well. The film mainly got negative reviews from critics but honestly, I don’t think this romantic comedy is THAT bad. In fact, I actually liked it and found it funny. I guess I’m in the minority though.

The movie centers around a NYC curator, Beth (Kristen Bell), who just doesn’t seem to have any luck with the guys. Her younger sister Joan (Alexis Dziena) is getting married in Rome over a weekend, so she flies over for the wedding, and worrying about losing her job at the same time. After one awkward situation after another, she’s rescued by a charming reporter named Nicholas (Josh Duhamel), who’s actually just as doofy as she is. Just as things start to pick up between the two, she thinks things fall apart and figures the best thing to do then is get drunk and pull coins from the Fontana Del Amore fountain. She thinks taking people’s wishes away will help her out but it actually has a different effect. What happens is a bunch of guys begin to fall madly in love with her and track her down back in New York. But Nicholas and Beth also try to continue what they started in Rome, but Beth is skeptical because she doesn’t think Nicholas is the real thing and is just under a spell like the other guys.

When In Rome isn’t an original or well-written movie but that didn’t stop me from liking it. I think the movie benefits from having 2 likable stars in Kristen Bell and Josh Duhamel. Plus the array of supporting cast like Will Arnett, Jon Heder, Dax Shepherd and of course Danny DeVito certainly helped things out. It’s also nice to see Keystone College alumni Kate Micucci being in more movies and TV shows.

I think if When In Rome was written better, this would have been a well-received romantic comedy. I think it’s biggest problem is the fact that it tries to be a physical comedy out of nowhere, and the movie has a lot of rom-com cliches in it. Josh Duhamel’s character randomly runs into poles, falls down holes (yes, he does) and other looney tunes stuff that makes you feel like you’re watching a movie from the Zuckers. It feels out of place but I still chuckled at some of them.

If you’re one of the few to actual enjoy the movie and want to see the extras, there are some bloopers, deleted scenes and 2 music videos from bands I could do without. I watched the bloopers and the deleted scenes. I could see why those scenes were deleted but I enjoyed the bloopers. Nothing really special in those, just actors messing up their lines like usual. But what do you expect from a blooper reel?

When In Rome fails to connect with many viewers but I found it decent enough to chuckle a few times. The cast is what made the movie for me. But in the end, When In Rome could have been better. 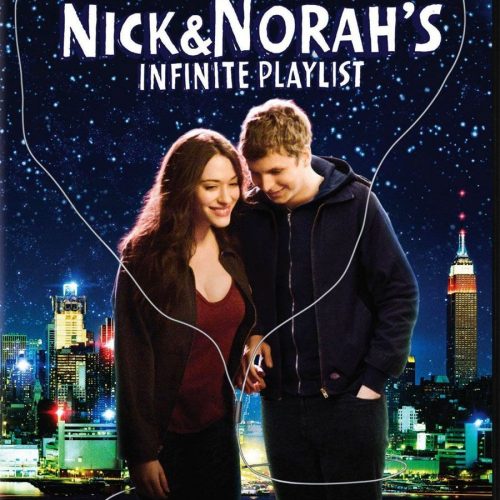