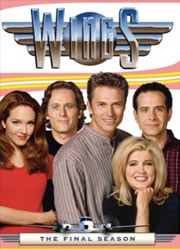 The final season of Wings is out on DVD and I’m all sad. I was sad when the show left the airways, and now I’m sad again it’s over with on DVD. Paramount pumped out the NBC TV series over the last few years and I always looked forward to the releases. I guess on the bright side, I can watch the series all the time now and not have to wait for the next season to come out.

Wings Season 8 starts off with Joe and Helen burning down Brian’s house, in the same exact way Brian and Casey burned down theirs. That results in not an insurance check at first, but an investigator. Things eventually go their way when the investigator herself ends up in a similar situation. The general themes of the final season is Brian and Casey having a hard time finding places to live since Joe and Helen kick them out. Brian has no luck with woman like usual, and ends up screwing things up or things don’t work out. Maybe Casey and him are meant to suffer together? Some of the episodes of the final season include: Joe and Helen meet the neighbors from hell, everyone ends up at a singles only party, Helen gets competition from a gourmet lunch cart, Joe is forced to take Sandpiper to an investor, and Brian becomes a hero when he saves a flight from crashing. The final episode sees Joe and Helen make a tough decision to both sell Sandpiper and move to Austria or stay put. Brian decides he wants to move to the Islands, and Casey wants to tag along as well.

Like I always say in my Wings reviews, it’s one of my favorite shows and it still makes me laugh after all these years. The final season was great and provided the fans with laughter and closure. Of course as a fan, I wish there would be Wings TV specials and we get updates from the crew but I doubt that will happen since the show has been off the air for 10 years now. Sadly, probably no one knows the show even existed or care at this point. I thought Wings had one of the best ensemble casts, and all of them had excellent chemistry together. I thought as the series progressed, the episodes got funnier. Thought Seinfeld, Friends were other shows that got funnier with each episode. I didn’t care for the 3 part episode when Sandpiper gets an investor involved. At the time I hated those episodes but after watching it again, it wasn’t so bad. I felt the final episode was excellent and thought it was funny how the first episode started out. Their insane Dad leads them on a wild goose chase, only to give them money that was in the airport the entire 8 years. How ironic huh? Just everything about the way the series ended was great in my mind.

Fans of Wings will want to own this DVD; just because it’s the last DVD you’ll get from Wings. I wish Paramount and CBS put a little more effort for the final release and gave us some extras with the DVD. Not even updated interviews with the cast, commentary, a featurette? Something! But that didn’t happen and fans are just stuck with the episodes. But hey, I’m happy they finally got released on DVD and I don’t have to try to find them on TV somewhere anymore.