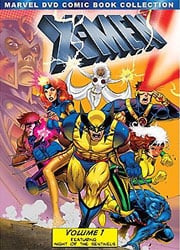 FINALLY! This 1990s X-Men series has been on the top of my most wanted DVDs list for years now. It’s probably the best adaptations to the comics, or so I think. I haven’t read too many comic books, I just collected them. This series was done by Marvel and appeared on Saturday mornings on Fox. Disney decided it was a good time to release Volumes 1 and 2 when X-Men Origins: Wolverine was coming out in theaters. Good move considering I always want to watch these cartoons when another X-Men movie comes out. If you ever called yourself a comic book fan or X-Men fan, this is a must-have DVD!

Marvel’s X-Men Volume 1 DVD starts out with a 2-part episode “Night of the Sentinels.” A young mutant, Jubilee, gets registered on the Mutant Registration Act by her foster parents and giant Sentinels try to capture her at a mall. The only problem for them is that some of the X-Men are shopping. They stop the mutant-taking robots and bring her back to the X-Mansion, owned by Professor X (Xavier). In this episode, we are introduced to Professor X, Cyclops, Beast, Jean Grey, Wolverine, Rogue, Gambit, Storm and an original character called Morph. The episode leaves the viewers on a cliffhanger, or it originally did. Thankfully we can just watch the next episode which shows the X-Men getting ambushed. There is a casualty and Beast gets captured by the mutant agency. The next episode after that includes the introduction of Magneto, Charles Xavier’s nemesis. The group fights him the next few episodes, along with Wolverine’s nemesis Sabretooth. Those two characters always pop up here and there, always getting in the way of the X-Men. Other characters that pop up in Volume 1 include Cable, Angel, Juggernaut, Colossus, Mystique, Apocalypse, Bishop, Mister Sinister, and lots more!

From what I can tell, I’ve seen just about every episode of this series. I used to get discouraged with Fox because they use to air the re-runs out of the order. I was hoping the DVDs weren’t going to be like that either, and thankfully they aren’t. They aren’t by season per say, as the first Volume goes into the second season. Of course, the beginning of the series was great and just cool to see all the X-Men characters being introduced. I have no idea if that’s how they were done in the comic books, but I really liked how things were done with this animated series. I just wish we saw more of Colossus and Nightcrawler. A lot of the episodes focus on Wolverine, but other characters see a lot of the spotlight as well. I’m sure everyone has their favorite character and wished they had more centric episodes.

The series was made for both kids and adults and has held up over time. I know that some series I used to watch as a kid, and then see them all grown up; they appear too kiddy now…but not X-Men. I loved everything about this series. It was dark at times; it was bad ass at times. I even love the theme song, which went through a few different versions over the course of the series. My only complaints with the DVD is the quality could have been cleaned up a little bit, and there could have been some extras. But I’m really happy these episodes are finally on DVD! And in order too! Stay tune for a review of Volume 2 as well.