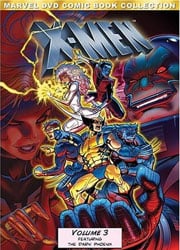 The latest volumes of the 90’s X-Men series have been released and the awesomeness continues! With Volume 3, there’s the Dark Phoenix saga, more stuff from the Savage Land, and introductions of more X-Men characters like Ice Man, Nightcrawler, The Dazzler, and others. Who knows if the episodes are in the correct order, but at least Disney is releasing all the cartoons on DVD!

The third volume starts off with a 2 part episode about the Savage Land. For some reason, I never like the episodes in the Savage Land. I like to see episodes in the “real world,” if that exists in the X-Men universe. That episode is about Sauron, that mutant green flying creature who can inhabit and steal the energy from other mutants. After that, the Dark Phoenix saga spans over 4 episodes and it’s a pretty good collection of X-Men cartoons. The Phoenix continues to take over Jean’s body, and the Inner Circle Club featuring The White Queen, Mastermind (Jason Wyngarde), and Black Bishop decide to use Mastermind’s abilities to trick Jean/Phoenix that they are lovers. Over the 4 episodes, the X-Men, the Inner Circle Club, and the Imperial Guard battle the Phoenix and each other. Other episodes in Volume 3 include: Iceman shows up and is caught breaking into a Government facility (which turns out to be X-Factor training ground); Corsair of the Starjammers tells Cyclops he’s his Father; Juggernaut returns but some nerd finds the Ruby of Cyttorak and becomes the new Juggernaut; Archangel becomes obsessed with defeated Apocalypse; and The X-Men discover Nightcrawler in Germany.

Volume 3 was similar to the previous DVDs. The quality was the same (not the greatest), there are no extras, and the episodes spread out over 2 discs. Like the others, the episodes are in a season per say, but for the most part in order. I know some aren’t but it doesn’t really matter for the most part. There’s no continuing storylines for viewers to get lost. I loved seeing the Iceman episode because it features characters from X-Factor. I always liked when X-Men brought in cameos from other Marvel characters. It just seemed like each episode brought in someone else from the Marvel universe. The Nightcrawler was cool because he’s a favorite of mine, but man it got too religious. Yeah I know it’s about the character, but maybe it was just too religious for a teenage/children TV show? Like I said above, the savage land episodes are okay but I’d rather see them not there. I don’t really like the space episodes as well, which some of these episodes took place.

For the most part, I liked these episodes just as much as the other volumes. Once I start watching the episodes, it’s hard to stop. I wish the quality was better but I’m just glad Disney is still releasing the DVDs. Next up is Volume 4!