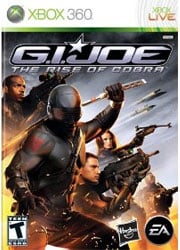 When I first got my copy of G.I. Joe: The Rise of Cobra for the XBOX 360, I was excited to get back into a world I hadn’t immersed myself into in about 20 years. I really had no intention of seeing the movie in the theaters, what with how expensive tickets are nowadays, so this was to be the closest I was going to get.

Unfortunately, my XBOX doesn’t particularly like this game for some reason, and the system completely locks up after finishing the first level, every time. So, for the purpose of this review, that’s all I will be reviewing.

The game starts with a nice cutscene, showing a giant APC (Armored Personnel Carrier for you laypeople) cruising through the snow, running over an abandoned Trouble Bubble (was kinda cool to see one of those). Then you are taken inside the APC, where you meet Scarlet, Duke, and Heavy Duty who is in the holding area, keeping an eye on the Baroness. A quick exchange between Heavy Duty and the Baroness, and four Cobra operatives teleport in, kidnap Heavy Duty, and then teleport back out, Baroness included. Duke and Scarlet manage to take one of them down, who leave behind a menacing symbol, which we see is the Cobra logo.

This takes us into the first mission, which Hawk describes is taking us into a weapons base in the snow. The voice acting up to this point is not too terrible, other than the repetitive “Yo Joe!” every five seconds. The overall gameplay is almost identical to Contra of early Nintendo fame. Basically strafe left to right, spraying out a barrage of bullets, picking up powerups. I was half tempted to try the up, up, down, down, left, right, left, right, B, A, Start, but the XBOX controllers don’t have an A or B button (I’m kidding, just wanted to illustrate how nerdy I am). The game has the added ability to duck and cover behind destructible objects in the world which, unfortunately, never last too long to be worth even ducking behind. After killing enough baddies to get your energy up, you get to use the Accelerator Suit (I guess the same from the commercial for the movie) which speeds up your movements and firing speed for a short period of time.

At the end of what seems to be this introductory, tutorial level, we meet up with the Baroness again, who tells us she is “changing the rules”, and then we are met with a giant tank (a H.I.S.S. tank for the real fans) hellbent on our destruction. Again though, this is just a strafe around a giant circle, pumping it full of bullets and lighting it up with a grenade when they’re available (apparently a grenade icon lights up over your head when you have a grenade ready, cause that makes sense). After quickly dispatching the tank (well, not quickly persay, but as quick as I could) we see that we have rescued our friend, and find out there are more people being held captive by Cobra, and then my XBOX freezes, usually making a high pitch noise that makes my cats flee the room.

I must say, I’ve had games that I couldn’t play before due to a scratch on the disc or whatever, but with this one, I wasn’t very upset that I couldn’t keep playing. If the first level is any indicator, it is monotonous repetition in a very linear direction, and that usually tends to lose interest for me in about ten minutes. After playing through that first level a couple times now (for the purpose of this review, not cause I enjoyed it) I am however a bit more curious to see the movie. Usually video games made from movies are crap, so if this is the case, I may actually enjoy the movie. If you enjoy mindless shooting and some mediocre voice acting, this game is probably worth a rental. It doesn’t seem like a game that would ultimately take too long to beat, and I may rent it at some point just to try it.

Bottom Line: Not the worst game I have ever played, but definitely not worth the forty some odd dollars to buy it new at the store.
Overall Rating: