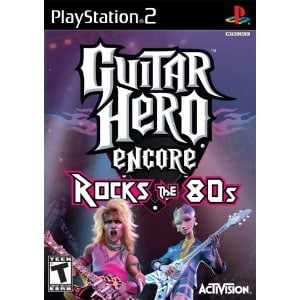 When I originally heard of “Guitar Hero Encore: Rocks the 80’s”, I thought to myself what any intelligent person with the slightest shred of musical knowledge would have, “Oh no! Not the 80’s. Why would they do this to me?” I think that the worst music of all time was created during this decade…hair metal. (Nu Metal comes in a close second.) I figured that hair metal would be heavily featured and that the game would contain track after track of songs about partying with girls by guys that look like girls. But alas, as the song list was ever so slowly revealed, there were some decent tracks that started to appear. Oingo Boingo, Eddie Money, The Police, Anthrax, Iron Maiden and the Dead Kennedys caught my eye. It was also becoming well known that the game would be a shortened version of the previous two Guitar Hero games. There would be no bonus tracks, only one unlockable character and only thirty songs total. Oh yeah, and it would be $50 for the game which was the same price for the previous individual Guitar Hero’s. So the day came, the game was released and I bought it. Was it worth it?

First of all, no matter what, I was not paying fifty dollars for this game due to the fact that it’s pretty much a watered down version of the other GH games. I managed to catch a Best Buy pre-order sale and got it for a lot cheaper. After cracking the game open, I flew through the first 17 songs on Hard in about an hour. Then the game screwed me over with two songs that are extremely difficult for a semi-decent Hard player. So I decided to play through the game on Medium because I’m a sissy and I was getting pretty pissed at “What I Like About You”. In another two hours or so, I had all of the songs unlocked with five stars on all of them on Medium on the first try and a few perfect songs. I went back into the Quick Play mode and tried some of the other songs on Hard and found that most of them were easier than the ones that I got stuck on. That makes sense, doesn’t it?

Out of the thirty songs that you are generously given here, I found quite a few that were extremely fun to play. There were just about as many that reached the rock out level on this game as there were on GH2. “I Wanna Rock” was a power chord rock fest, “Turning Japanese” had a good variety of fast strumming and chords, “Police Truck” was just flat-out furious and “Only A Lad” was just pure fun. On the negative side of things, other than the fact that I had to listen to Skid Row, Poison and Winger is that it seemed like a lot of the songs just wouldn’t end. Even some of the songs that were semi-fun to play got turned into a repetitive bore and there were a few songs that had what seemed like one minute breaks smack dab in the middle or at the beginning of the song. You really shouldn’t have to listen to “We Got The Beat” any longer than a sane person would want to.

Overall, with Activision finally taking over the GH license and apparently looking to get a quick cash in (which they did), the definitely did not take the time that they should have with this game to make it into a true Guitar Hero representation. Even though the track listing was diverse, just imagine what could have been if they would have put a full GH set list in there as well as all the fun they would have had with unlockable characters that would have both made fun of as well as paid tribute to many notable rock figures from the 80’s. (The Grim Flav was a nice touch) They could have done so much more with the game but they didn’t and although fun at times, “Guitar Hero Encore: Rocks the 80s” plays through quick and finds itself sitting on the shelf while I drool at all of the awesome songs and features that are going to appear on Guitar Hero III.

Bottom Line: Guitar Hero Encore: Rocks the 80 is like one of those demo games that you play at Game Stop it feels like half the game it should be.
Favorite Aspects: The revised 80 versions of all your favorite characters, playing some Dead Kennedys right after playing some Iron Maiden, and jamming to I Wanna Rock!
Cheats:
Overall Rating: