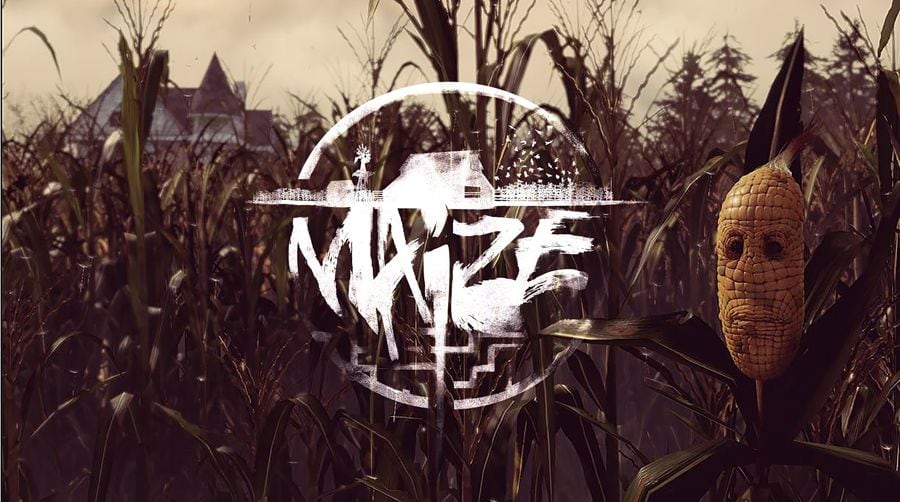 What happens when you discover an unsettling farmhouse in an unknown part of the world that is full of mystery, intrigue and corn…but not just any corn…sentient talking corn with a British accent? You journey forth, good sir!

“Maize” developers describe the game being heavily influenced by a combination of Monty Python and “The X-Files”. There is also a heavy dose of the classic PC point-and-click puzzle adventure game “Myst”. When the game starts out you find yourself in a cornfield in the middle of nowhere as three mysterious figures quickly disappear from your line of sight. As you make your way through the cornfield, creepy 80s B-movie music hauntingly plays in the background. Eventually you come upon a desk set up in the middle of the path. There you collect an important item…a stale English Muffin. Soon after you stumble upon an abandoned farm house and this is when things start getting interesting.

Underneath the farm house is an unfathomably large underground research facility filled with statues of varying sizes, lobbies, science laboratories and even a recording studio. You also discover the complete ridiculousness of a pair of scientists named Bob and Ted. According to their memos…ahem Post-It Notes…they accidentally created sentient corn, wasted all of their money on creating statues of themselves, random lobbies around the facility, the most expensive CD single of all time and a prototype Teddy Ruxpin named Vladdy that speaks Russian and has a serious hatred for stupid idiots and pretty much everything else.

Your mission is to find out what the hell you are and what the hell is actually going on around this secret farmland base. The game is quite linear and does a lot of hand holding to help with things like collecting or interacting with items… they’re highlighted in a bright white glow or tipping you off with the usage of items…the items give you simple clues on how to use them in the item menu. The most difficult “puzzle” that I encountered was simply something that I had passed up on my travels and forgot that I was there when later needing to progress through the story.

While there is a simplistic and linear nature to “Maize”, that does nothing to detract from the quirky weirdness and off-the-wall humor of the game. Toting that your game pulls from the Monty Python school of comedy is a bold statement and not something you take lightly. Throughout the game there were definitely goofy, laugh-out-loud moments but nothing that could be considered a Monty Python-esque instance…that is until the end game. Without throwing out any spoilers, when you discover who or what you actually are and begin to finalize your escape from the farmland facility, that’s when things go bonkers and it’s just one amazingly weird moment after another. You also finally discover the use for that stale English Muffin that you picked up oh so long ago.

When it comes to video games, I’ve always been fond of the strange and the weird. From “ToeJam and Earl” and “Earthworm Jim” to “Saints Row” and “Guacamelee!”, the weirder the better. “Maize” finds itself on the majorly weird end of the spectrum and that just adds to its charm. Whether your hanging out with a vituperative Russian Ruxpin, searching for the Ruby Red Queen, answering trivia from walking talking cornstalks or just admiring the twenty foot tall gold-plated statue of Bob…”Maize” is just what the mad scientist ordered for a double dose of wild and wacky gaming. Grab yourself a cold drink, pop some popcorn and try not to think about the friends that you’ll meet along the way and why you’re probably eating them.