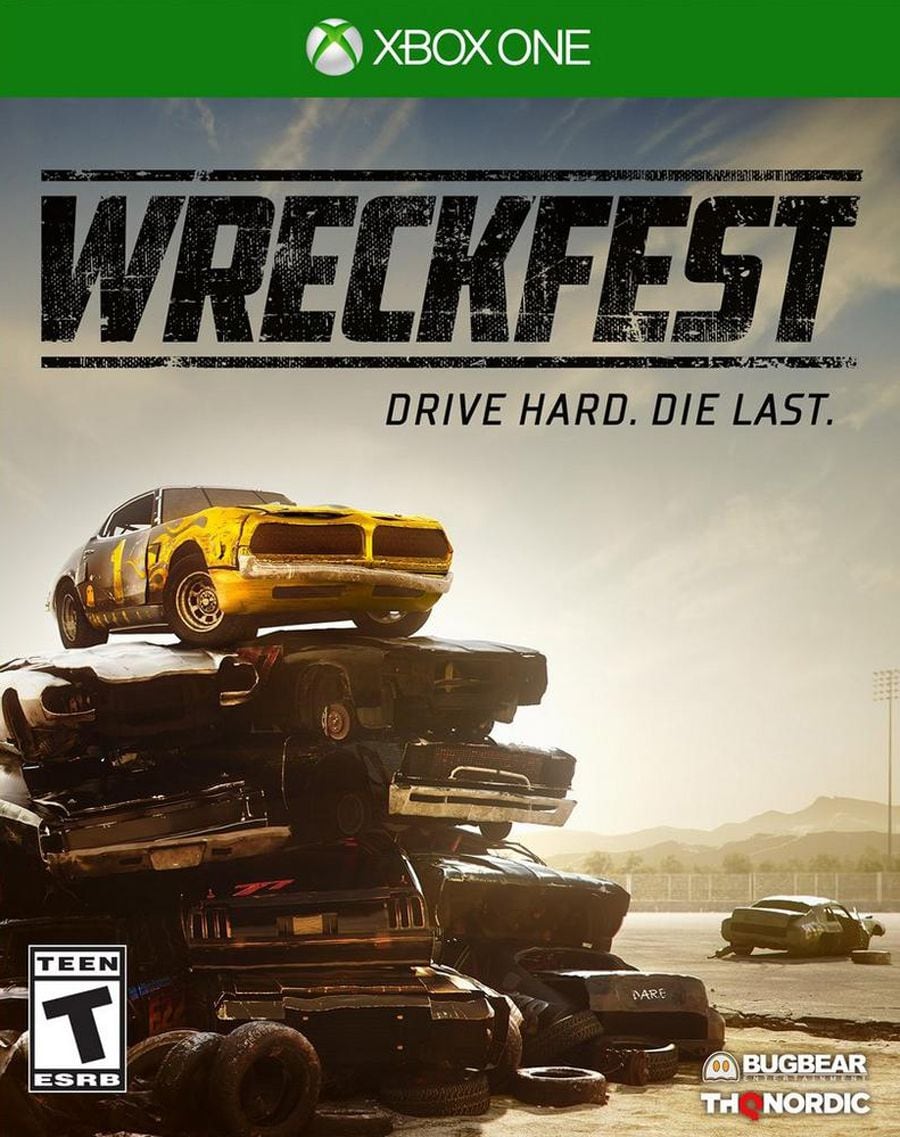 “Wreckfest” isn’t about just winning the race; it’s about utterly destroying everyone and everything in your path on the way to the top. With a motto like “Drive Hard. Die Last”, you should know not to expect another “Gran Turismo” or “Forza” clone.

If you go back a few console generations, you may recall that there was a series called “Destruction Derby” which “Wreckfest” draws inspiration from. The concept was simple, you could either play in a straight up demolition derby arena where the last man standing wins or race against others in a crash and bash racing format where you scored more points for wrecking your opponents than you did for actually winning the race. My friends and I spent countless hours mindlessly crashing into one another in battle royale style, passing the second controller around to the next victim. “Wreckfest” takes this concept and brings it into the modern console generation with a slew of customizable vehicles, levels, play modes and a career mode.

There are quite a few options available for play right off the bat in “Wreckfest”. You can dive right into career mode, where you compete in a variety of events from standard races and demo derbys to lawnmower demo derbys and couch races; in order to gain enough points to move into the next class and work your way to the championship…or you can opt to quickplay a variety of customizable events. If you feel like jumping right into the thick of things, “Wreckfest” has online multiplayer where you join a lobby of your choosing and can invite friends into the same lobby so that you can go head to head with each other as well as up to 14 other players.

As you play, no matter the mode, you gain experience as well as at times credits used to purchase upgrades for your vehicle or to purchase new vehicles entirely. You can customize everything from your rims and paint job, you can add armor to your vehicle, upgrade engine and suspension components or just adding some flair to your vehicle such as a mohawk or a shark on your roof. You can also take your customized ride online for use in any of the online matches.

The game modes are pretty basic to those with any knowledge of demolition derbys or racing in general. You can switch between Last Man Standing or Deathmatch modes in the demolition derbys or the banger races with each working slightly differently. Last Man Standing means that you need to be the last vehicle operating by the end of the match in both modes but Deathmatch is timer-based in demo derby arenas, which allows you to respawn and keep wrecking things until the selected time expires, while in race mode that means that the bottom half of the standings are eliminated at certain intervals. While I enjoy the Last Man Standing mode, demo derby Deathmatch is much more fun and is the default mode for online play. Instead of possibly only getting to play for a minute or so, everyone is always involved until the time expires. It’s also more fun and chaotic with 16-24 cars in an arena at all times!

The graphics for “Wreckfest” are fairly realistic and the crash physics are mostly grounded but provide plenty of opportunity for over-the-top wrecks and vehicle launching, especially with particular levels that encourage your cars to catch some air. There is also a fairly decent soundtrack that varies from rock to metal and some dubstep that provides just enough hype and background noise for you to get amped up for the next upcoming crash.

One of the surprises in “Wreckfest” for me was the variety of vehicles available to choose from. All of the vehicles in-game are unlicensed versions of real vehicles but with variations of their real names. My car of choice is a lime green El Camino which goes by the name of El Matador in game but other representations of various cars appears from Corvettes, Monte Carlos and Challengers to Fiats, Jaguars and BMWs. To add a little bit of fun variety to the game, you can also unlock things like a school bus, limousine, motorhome, sofa car and even a combine harvester!

While the online mode is a welcome addition for a game such as “Wreckfest”, it has its issues. First of all, you can’t actually create your own lobby…you have to jump into a specific gameplay mode or event and then hope that your friend can get into the same lobby on his own or via the sometimes available “invite friends” option. Sometimes there are as little as 30 lobbies available to join while other times there are upwards of 100. My friend and I usually didn’t have issues finding an emptier lobby to jump into but staying in said lobby was oftentimes another issue entirely.

Before the first game update, lobbies weren’t very stable and there were issues with people getting booted from the lobby, myself and my friend included, for vehicle violations or random ping timeouts. Once booted, we couldn’t jump into another lobby for upwards of an hour later. Sometimes you would get stuck in a lobby in ready mode but be passed over when the game started even though the event didn’t reach maximum players. This would occur continuously for a few races at a time before it would accept you into the race. Once the first update was implemented, online multiplayer became much more stable.

In an era where racing simulators reign supreme, “Wreckfest” takes the age-old concept of wrecking into things for sport, and brings it into the modern gaming world with a game that is as equally fun as it is addictive. While the gameplay can be repetitive and mindless at times, upping the difficulty makes skill more of a necessity than a luxury. The career mode is robust with a variety of special events, tournament modes and plenty of vehicles and customizations to choose from while online play allows you to bring in your customized vehicles for 16 player action. If you’re looking for a semi-grounded, semi-arcade style over-the-top wrecking racing game, “Wreckfest” has your name written all over it…most likely in scuffed up neon spray paint.