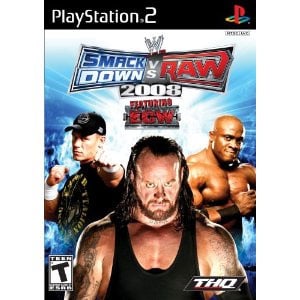 You want to know when the last time I played a wrestling game? It was back in the NES days in the 80s. Wrestling games have improved a lot since then; better graphics, cooler moves, various gaming modes. But in the end, a wrestling game is the same thing it has always been, just more advanced. While WWE Smackdown VS Raw 2008 may appeal to wrestling fans mostly, the game is still entertaining to play if you’re not a wrestling fan. (like myself).

The game combines WWE Smackdown and Raw and has been a successful series so far for Playstation 2. The game is also available on other platforms but since I’m cheap, I reviewed the game on the Playstation 2. I don’t play video games as often as I use to so there’s no need for PS3. But the first thing I noticed when I turned on the game is how long everything took to load up. For someone who doesn’t play video games as much as I use to, this is a big negative with me. I just don’t have the patience to sit through video games loading, and loading. Like who cares about the wrestlers making their way to the ring. People just want to beat the crap out of each other, who cares about that in a video game. Just turn the damn thing and let’s go already. It seriously took me like 8 minutes to even get to a game mode.

I thought the graphics were pretty good. The characters’ movement didn’t look too awkward. I don’t know who any of these wrestlers are so I can’t tell you how well the game characters resemble their real selves. It took some time to get use to the controls, and how the game works. Maybe it would have helped if I read the manual beforehand? It just seemed whatever I hit, the guy kicked and then the computer character would grab the leg. That grew tiresome after awhile. So I suggest you read on how to work your character before playing because I had no clue what I was doing and just kept hitting buttons over and over. Besides just playing one game, you can play several game modes as well. I didn’t bother to check those out though. Other features available in the game include online gameplay where other wrestling gamers can compete against each other. You can also customize your players as well, which is always fun to do.

Overall, WWE Smackdown VS RAW 2008 has some good qualities to it, but in the end I think it’s a disappointment. Some things are just too clunky and confusing to me. As a sometimes-gamer, I’m not sure I would have bought this game but perhaps wrestling fans/gamers will appreciate this PS2 game more than I did.

Bottom Line: The game is ok, but could have been better.
Favorite Aspects: I like how you can compete with people online. Of course I don’t have that feature but if I did, I would like it haha.
Cheats:
Overall Rating: