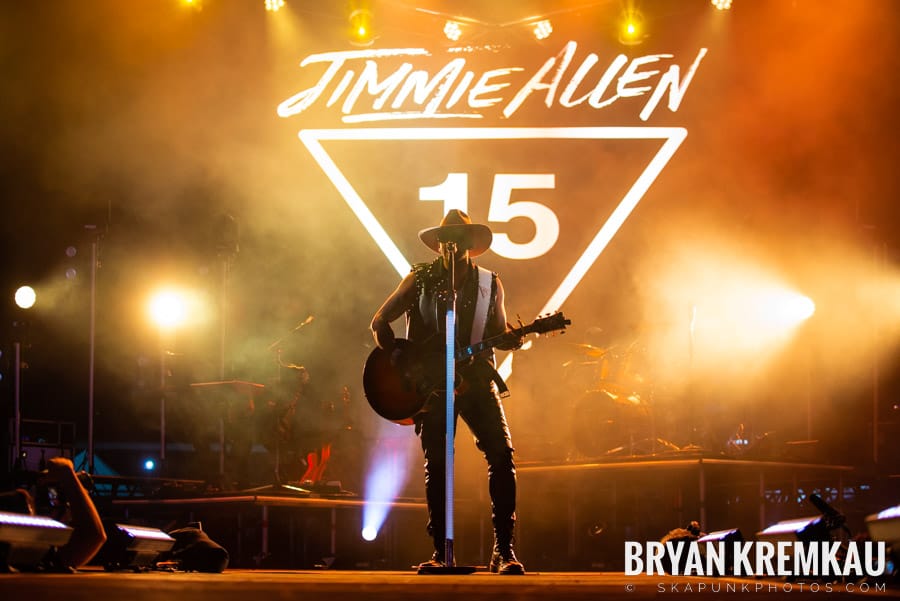 I haven’t been to a concert since January 2020, right before everything shut down. Last year, my wife and I welcomed another kid and it just made things harder to get to shows. Fast forward to a year, I’ve relocated to “Slower Lower” Delaware, Milton to be exact. Seems like everyone from NY and NJ are moving here. I have family here, can work remotely so a lot of things just lined up. When I was visiting down here last August, Jimmie had his first Bettie James Festival here and saw some cool photos in the Cape Gazette from photographer Dan Cook. Jimmie played during some torrential rain it looked like. After seeing that, I looked up Jimmie’s music and instantly became a fan after hearing “Freedom Was A Highway.”

I’m a newbie fan and honestly, the type of country I listen to is more Americana, alt-country, folk or some older stuff like Johnny Cash and Hank Williams. There’s something about Jimmie Allen’s music and style that appeals to so many different people that don’t normally listen to country. He crossovers into genres like country, pop, rock, folk, etc. The guy knows how to freakin’ sing, and deliver some catchy lyrics. I’m hoping he can collaborate with some reggae artists because I think his style would work well considering southern Delaware/Ocean City has a decent reggae scene. But alas, on to the festival!

I arrived after 5pm and things seemed like they were running a bit behind already. I got my passes (thanks to Jimmie’s team and Neon Union manager), and sat backstage while Kounty performed. After that, it was singer/songwriter JJ Rupp who was pretty good. I believe he had a record release party right after his set down in Dewey Beach, as well as the next day at the same club. After that, American Idol winner from season 19 Chayce Beckham was next. I don’t really know what songs he sang but he released an EP this year and is releasing an album this week actually. He sounded good and will keep an eye out on his material going forward.

At this point, I went out into the crowd and walked around a bit while Chayce was playing. I tried waiting in line for 20 minutes for food and the line was going nowhere. I bailed on that idea. The bathroom lines were pretty long too but just had to have some patience I guess. I had to get back to take photos so waiting in line was tricky. The next group up was Neon Union, a country duo. They sang on Jimmie’s ‘Bettie James’ album and I believe Jimmie’s involved with them in many aspects as well. They just signed a record deal with Red Street Records. There were some technical difficulties happening which made things get pushed back further. DJ Cheese entertained the crowd between sets to keep the crowd from getting restless…but it all worked out in the end. They were fun and got the large crowd into their music. Their single “Beer Up” was really catchy and I could see that being used in a beer commercial or something (if it hasn’t been already). Neon Union seem pretty active on social media with doing song challenges and skits so give them a follow on Instagram and elsewhere.

The sun was setting at this point but the music kept going for many hours to come. Country music singer/songwriter Lainey Wilson was up next with her band. Unlike the other groups before, Lainey utilized the t-shaped stage from the get-go and was running all over the place. She was in the moment, enjoying herself and singing wonderfully during the sunset. There were only two songs I recognized from her since I haven’t listened to much of her music. She played her single “Heart Like a Truck” and a cover of 4 Non Blondes’ “What’s Up.” She announced she is going to be on Yellowstone season 5, which is set to premiere in November on Paramount. I’ve been a fan of Yellowstone from the beginning and she seems like she will be a good addition. I got into Ryan Bingham’s music because of that show so…

…And now for something completely different. We the Kings performed second to last and it’s definitely a name I recognized since they played Warped Tour and have a pop punk/rock style. They were handpicked to play the festival by Jimmie and a lot of people didn’t know who they were, which was kind of funny. Frontman Travis Clark even brought that up during the set and thousands of hands were raised when he asked who doesn’t know the band. By the end of the set, they won the crowd over though. Especially when Travis was trying (and failing miserably) to explain in a family-friendly manner, the first time he hooked up with his girlfriend when he was a kid. He was using Tetris analogies and had the crowd in stitches because he kept slipping other phrases that weren’t Tetris related. I’m not too familiar with their music but did recognize “Secret Valentine,” one of their more popular songs. They joked at the end that they wrote Jimmy Eat World’s “The Middle” and for the people that knew the song, to pretend they wrote it. I’m pretty sure they played their other popular song “Check Yes Juliet” as well. They played for 45 minutes and then it was time for the star of the night, Jimmie Allen!

Jimmie’s band came out and were jamming to the intro with some cool lighting and then, Jimmie starts to sing but he’s not around. I was expecting him to come from behind the stage, except he rose from the stage instead! That was an entrance! Not sure he does that every time but I got a kick out of it. He then went into one of his earliest singles “Make You Want To,” like he tends to open with based on setlist.fm. Followed by “Get Country” and “Big in a Small Town.”

Jimmie just screams “star” based on his fun personality, his obvious musical talent and he’s just an overall outstanding performer. I think one of the biggest reasons why I like Allen’s music is the crossover effect. One minute it sounds like radio-friendly pop tunes and then the next it sounds like country; or a combo of the two. Other times he sprinkles in some other flavors. It definitely didn’t feel like an “all country, all the time” type of festival. DJ Cheese blaring Whitney Houston, Earth, Wind & Fire, some hip-hop, a little bit of Bob Marley in-between sets makes you forget what type of music you’re about to see. A little bit of everything for everyone to love and reason why Jimmie’s stardom continues to rise. He was on Idol this season as a mentor, despite not “going to Hollywood” himself on an early season. He’s done Dancing with Stars and seems like he’s willing to do anything these days and just have fun. Was that rumor of him training for the WWE real?

After the first few songs, he played “Settle Back” off his excellent new album, “Tulip Drive.” I was hoping for “Wouldn’t Feel Like Summer” or “Kissing You” but he didn’t play those. Maybe next time? Jimmie has a lot of songs with other artists, so he used their audio tracks and video was played in the background as he sang for those songs. That happened for songs like “This is Us” (with Noah Cyrus) and “Flavor” (featuring Pitfull). It was great to hear “Good Times Roll” and Neon Union came out to sing “Livin’ Man” with Jimmie soon after. “Be Alright” is another highlight off the new album, and he played that. You can’t help yourself sing “alright, alright, alright” over and over.

At one point, I was watching from the crowd and didn’t even notice Jimmie was not on stage. I thought it was just a pause in the show from a technical perspective. I was like what’s going on, everybody was running and I was starting to panic that something bad happened. Thankfully, Jimmie showed up in the middle of the audience on a riser and performed 3 acoustic songs. Definitely a cool moment but it had me worried for a minute. By this point in the concert, I noticed a lot of people leaving just because it was getting late. A lot of people had kids around so I’m sure they were exhausted, I know I was. I was thinking the concert would be over because of curfew but Jimmie joked he got the key to the town, they can leave everything open for a bit longer.

He played a song with his sister; Jimmie said he hadn’t sung with her on stage since church when he was 17. An old friend who opened the concert, Derek Daisey, came out to perform Goo Goo Dolls “Iris” with Jimmie. It was nearing midnight but Jimmie Allen kept going, I kept walking further in the back so I wasn’t stuck in my car for an hour when the concert finally ended. He played “Home Sweet Hometown” followed by about 5 minutes of banter and jokes. There was no encore type of thing so maybe the banter stuff was avoiding the awkwardness of waiting for the band to come back on stage?

The ending was near and he played “Down Home,” one that really hits close to home with me since I lost my Father in 2015. I’m sure many others can relate to it for the same reasons. When he brings up fishing, that part sticks since my Dad was a fisherman as well. He then went into the song that got me into his music, “Freedom Was A Highway” and unfortunately I was leaving for the car then so I didn’t see him perform, just hearing it. I’m assuming that was the end since it was 12:30am? He might have continued on after that.

This was my first “country” concert per say and it was a blast! Jimmie’s an awesome performer and the rest of the bands were a lot of fun to watch too. I was happy I only had a 5 minute drive home too. Thanks to Jimmie and his team for the passes and thanks to Dan Cook of the Cape Gazette for chatting with this newly Delaware resident all night.

Some photos from the night!

I’ll have more on my photo site skapunkphotos.com at some point this week.