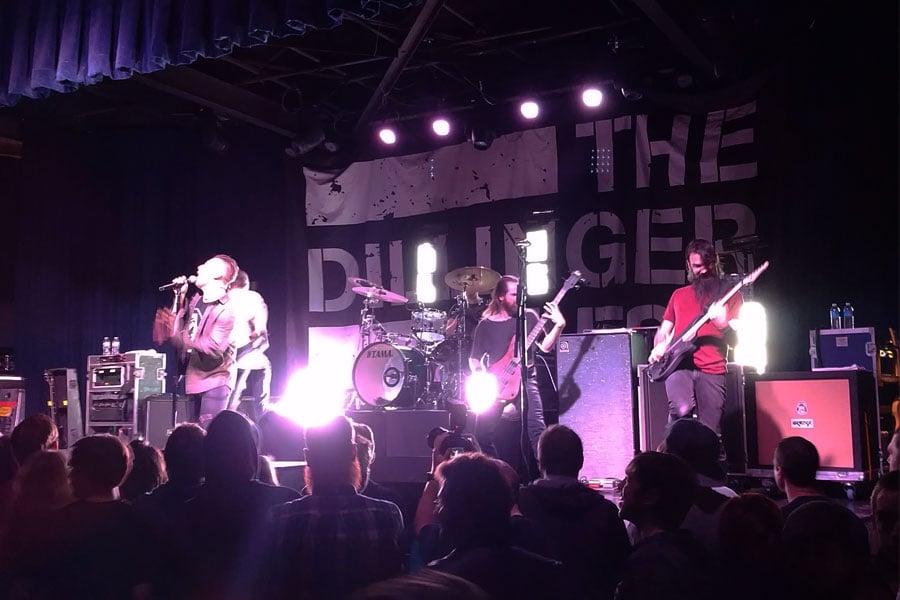 After a near 20 year career, Dillinger Escape Plan announced they’d be calling it a day. It kind of sent shockwaves as there didn’t seem to be any cracks in the seam of a band who’s output is seemed to be getting better with each release. Then again, you have a band with an extremely physical live show, and it’s bound to take its toll over time. This was my first time, in this impressively clean state for a metal venue.

The openers for this show seemed very mixed, which worked, because Dillinger themselves have a very diverse discography. Bent Knee was the first band on and it was definitely not a band you’d expect to see with them. Bent Knee seemed to appeal to Dillinger’s more spacey/artsy side, with a keyboards and violins presented and interesting mix of alternative rock styles. It was a good way to wet your palette before the rest of the show.

Next up was Cult Leader. I had seen this band previously when they were known as Gaza, so I knew what to expect from them. Post Metal mixed with grindcore and the darker side of hardcore melded together for an unrelenting assault on the crowd. The set flowed well, although I’m not sure this crowd was ready for their abrasive style.

O’Brother was the last band up before the headliner. I had seen them before, opening for Thrice a few years ago, and this felt like a better experience. The band sounds like a mix of later years Thrice with Radiohead/Muse vibes with some southern charm. It was a very soulful listen and they shined here.

This isn’t my first time seeing Dillinger Escape Plan, the first time I saw them was back in April of 2000 with a different lineup, but over time adding newer members like Greg Puciato made the band more dynamic. Tonight’s set seemed to be a great mix of the extreme side and artsy side of the band, while delving into classics like “Sugar Coated Sour”, “Prancer”, “Farewell Mona Lisa” and also some of their more rock orientated songs like “Black Bubblegum” and “Milk Lizard”. Ben Weinman was in classic form spin jumping off speakers, and the rest of the band kept up the energy. The set featured 4 new songs, although if this was the “final tour” as the venue boasted, I was expecting more of a career retrospective set, but the set had a good mix of the great music they’ve made with Greg on vocals.

As the last notes rang out on the outro to “43% Burnt”, that this was possibly the last time I’d hear them in a live setting. The band has perfected displaying their art in an extreme format, while being true to their original artistry that paved the way for many more experimental extreme bands in the metal/progressive genres. I will say being up to about 8 or 9 times seeing them live throughout the years, even if you’re not to familiar with musically, you should make it a point to see one of the most powerful live acts in heavy music.